Wherever You Are: a night of music with Cora Rose & guests

This intimate performance event will round out Friday evening of the Art We There Yet / Wherever You Are weekend at The Martin!

Join us for performances by Cora Rose, Leslie Beukelman & Emma Grace as we celebrate music, art and the combining of communities.

Cora Rose is a singer-songwriter, performer, and producer originally from the USA. She began songwriting at 7, performing at 12, and released her first album at 15. Her work has been used in film, theater, and television, including NBC’s Parks and Recreation and the acclaimed documentary, Taming Wild. Her first original score garnered an Outstanding Achievement for Best Score from the Druk International Film Festival. She developed a songwriting workshop program, which she has conducted in schools and community centers for over 14 years.

Leslie Beukelman is a Chicago based singer-songwriter and recording artist who has forged a central role in Chicago’s vibrant music scene. Leslie thrives on her versatility and ability to make music in many different settings, while remaining true to her voice. She holds a degree in jazz studies from the Chicago College of Performing Arts at Roosevelt University and is a top call musician for session work from musical endeavors to character voices for children’s books. As the pandemic made it difficult to perform with other musicians, Leslie has been giving more attention to her work as a solo artist. Her style ranges from jazz to pop to folk and she has been described as having “a striking voice that conveys emotion subtly and elegantly… her sound is haunting and personal.” (All About Jazz, 2020). Leslie is currently working on recording a new album with The Oh Yeahs, in addition to writing new material for her third solo release.

Emma Grace (she/hers) is your ukulele siren; a singer-songwriter based in Chicago who has performed her folk/punk original songs across the US for hundreds of bars, storefronts, music venues, speakeasies, and festivals. She was recently awarded 1st place in the FlairXL Virtual Singing Contest among over 1300 worldwide submissions. She writes and sings about many emotional human experiences, such as grief, falling in love, ghosting, hook-up culture, and sexuality all while encouraging body love. Her baritone ukulele alongside her emotional and bellowing vocals create a uniquely healing musical experience. Her most recent release and sophomore album, “Waves of Grief”, can be found on all the listening platforms.

This is a vaccinated-only event and all guests will be required to prove vaccination status upon entry. A beer, wine & NA bar will be available for purchase for any guests 21+. All guests are required to wear masks.

Entry is a suggested $10 donation with all proceeds being split between the artists.

The Martin & Split-Rail are both ADA accessible. If any guests have accessibility questions, please don’t hesitate to reach out!

Tags: Chicago, Cora Rose, Emma Grace, Leslie Beukelman, The Martin, West Town, Wherever You Are: a night of music with Cora Rose & guests 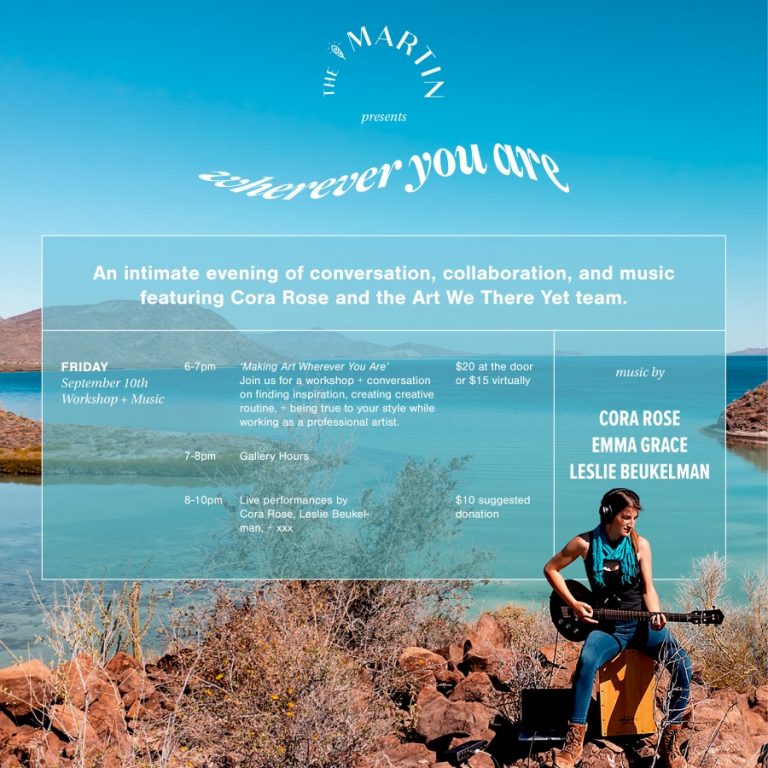