Join us for an afternoon conversation on Women & Children First’s Crowdcast Channel celebrating the release of Belly of the Beast: The Politics of Anti-Fatness as Anti-Blackness by Da’shaun L. Harrison. For this event, Harrison will be in conversation with Hanif Abdurraqib.

To live in a body both fat and Black is to exist at the margins of a society that creates the conditions for anti-fatness as anti-Blackness. Hyper-policed by state and society, passed over for housing and jobs, and derided and misdiagnosed by medical professionals, fat Black people in the United States are subject to sociopolitically sanctioned discrimination, abuse, condescension, and trauma.

Taking on desirability politics, the limitations of gender, the connection between anti-fatness and carcerality, and the incongruity of “health” and “healthiness” for the Black fat, Harrison viscerally and vividly illustrates the myriad harms of anti-fat anti-Blackness. They offer strategies for dismantling denial, unlearning the cultural programming that tells us “fat is bad,” and destroying the world as we know it, so the Black fat can inhabit a place not built on their subjugation.

Da’Shaun Harrison is a Black trans writer, abolitionist, and community organizer in Atlanta, GA. Harrison currently serves as the Managing Editor of Wear Your Voice Magazine, and is the author of Belly of the Beast: The Politics of Anti-Fatness as Anti-Blackness. Harrison is also a public speaker who often leads workshops on Blackness, queerness, gender, fatness, disabilities, and the intersection at which they all meet. Their portfolio and other work can be found on their website: dashaunharrison.com.

Hanif Abdurraqib is a writer from the east side of Columbus, Ohio. 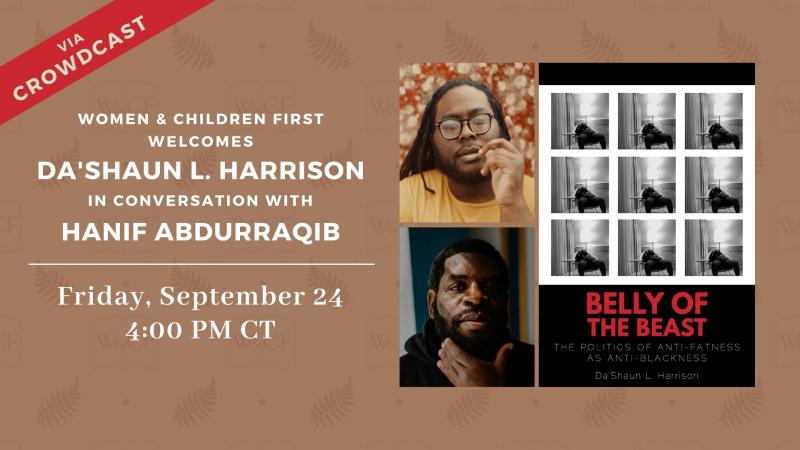