“This Is Indian Land, Okee-Chee’s Vision” by Sharon Okee-Chee Skolnic is a 35 minute independent documentary using interviews and images by Okee-Chee with her collaborators to highlight her vision and contribution to their community at the American Indian Center and Chicago. Sharon Okee-Chee is a visual artist and filmmaker who originally participated in the Anišinabe Waki-Aztlán exhibition at Truman College in 1977. We are honored to screen this film as an addition to the Anišinabe Waki-Aztlán Exhibition (1977) discussion, developed by Jose Luis Benavides, to highlight her role within Chicago arts communities. This film was produced by Nancy Bechtol and David Bechtol from Shadow Bechtol Studio in 2017. This will be an outdoor screening on Comfort Station’s lawn.

Sharon Okee-Chee is a Fort Sill Chiricahua Apache-Sioux tribal elder and recognized artist, writer, archivist, former-director of The American Indian Center. She attended the Institute of American Indian Arts in Santa Fe, N.M. She has exhibited at Michigan State University Museum and the University of Tulsa’s Gilcrease Museum. She was featured in the City of Chicago-sponsored Chicago Artists Month program in October 2011. She also created a diorama of Native dolls for an exhibit at Chicago’s Field Museum. For a decade she operated Okee-Chee’s Wild Horse Gallery, Chicago’s first Native American art gallery. Her 1997 childhood memoir “Where Courage Is Like a Wild Horse: The World of an Indian Orphanage” (University of Nebraska Press), written with her husband Manny Skolnick, earned a literary award from Friends of American Writers Chicago.

This event was a postponed program from 2020. To access info about the initial program, please visit the project’s page on chuquimarca.com.

Made possible in part by a grant from Illinois Humanities, the National Endowment for the Humanities, and the Illinois General Assembly

Image source: BEHIND the SCENES: Director Sharon Okee-Chee Skolnick on “This IS Indian Land”, Youtube. 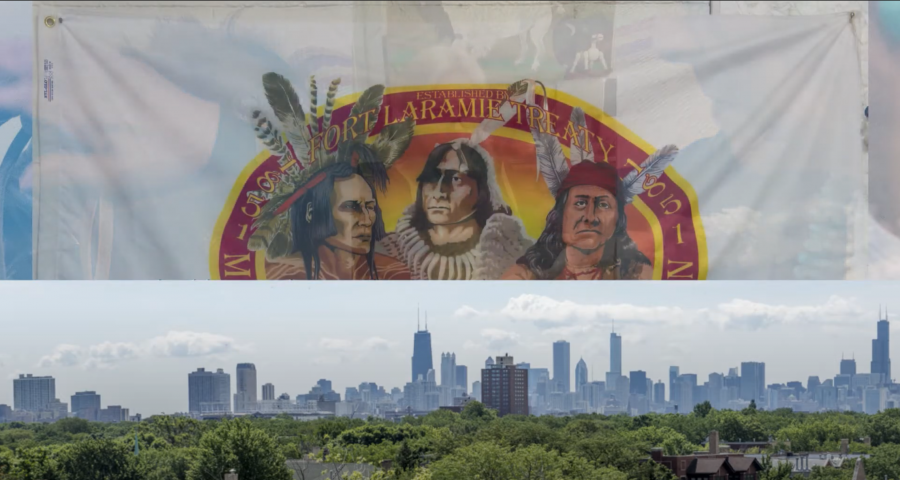