On view through Sunday, November 21st

table is pleased to present Bread Story, an exhibition of new work by Los Angeles/Barcelona-based artist Lúcia Prancha. This is the artist’s first solo show in Chicago.

Bread Story consists of a video, artist book, and a series of photographs. Prancha used Bertolt Brecht’s (1898–1956) original screenplay as a structure for an experimental film featuring LA based bread-worker Roxana Jullapat, while tracing an American landscape marked by the displacement and industrialization of the past century.

Roxana Jullapat was born in California but grew up in Costa Rica. She returned to the United States and learned to bake bread in Los Angeles and worked for other bakers before opening her bakery, Friends and Family, in 2017. Though born in the US, her experience growing up in Costa Rica influences her sense of production. She wakes up every morning at 3am to start baking bread and recently published a cookbook titled Mother Grains: Recipes for the Grain Revolution.

Bertolt Brecht arrived in California as an exile in December 1941 where he wrote the script for “The Bread-King Learns to Bake Bread.” This film was never produced due to the screenplay and its writer’s communist affiliations, which were actively being suppressed by the Hollywood blacklist. Brecht’s text implies questions of time, production, consumption, and mechanical and manual labor. Prancha found the Brecht text while living in Los Angeles and views it as a critique of the so-called American Consumer Society, in this case, from an immigrant’s perspective.

In this exhibition, Lúcia Prancha continues her exploration of production and labor by exercising the tension between text and image as well as printed and video media. The exhibition’s original artist book, series of printed photographs, and video, were completed in 2021 as a culmination of a project the artist began in 2019 with the Los Angeles Contemporary Archive (LACA). Central to this rendition of Bread Story are a series of photographs of Roxana’s hands, which for Prancha act as a kind of portraiture. These images of hands line the walls of the space and are intimately repeated through the artist book, in this case taking form as a transparent box housing the photographs as hand-held objects, and a printed booklet of the video’s narration. The video piece brings together archival material, analog and digital photographs, and moving image. These elements are situated within a contemporary narration of Brecht’s text, which has been recorded and filmed inside a sound booth, calling attention to the system of its own production. 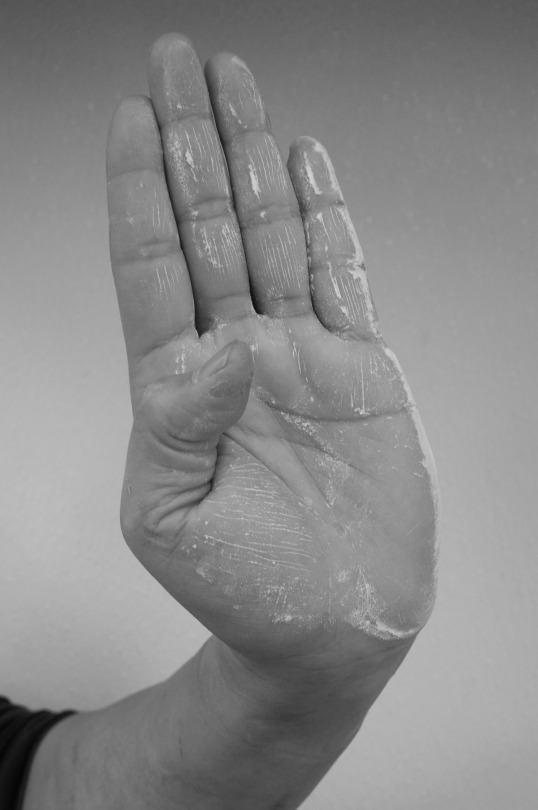