On view through Sunday, December 12th

Join us for the opening of Douglas R. Ewart in Audible Gallery featuring the visual work of the virtuosic artist and educator Douglas R. Ewart, along with the Chicago premiere of Ewart’s recent large-scale audio-visual work “Songs and Stories for a New Path and Paradigm,” created in collaboration with NOW Society of Vancouver and 36 artists from across the globe.

Light refreshments will be served in the garden.

I am a composer, musician, instrument builder, visual artist, educator, writer, poet, conceptualist, craftsman, tailor, philosopher, and community activist/worker. Over the past forty-years, my work has evolved into a confluence of indivisible practices. Each discipline aids and acts as a catalyst for the others, with music as the overarching and galvanizing agent.

As a visual artist I use some of the same approaches in realizing my works. I use conventional and experimental approaches to render the work and retain the poragivite to discard or utilize an approach, technique, and tool.

As a composer, I utilize many methods to actualize my works: traditional western notation, graphic and text scores, improvisation, oral directives and gestures, as well as, memorization vehicles and techniques. I have always sought, and continue to honor the inclusion of an intuitive level within my compositions that utilizes many of the innate sensibilities of the artists. Sensibilities that are all too often neglected, underestimated, misunderstood, and dismissed.

This approach to composition and the visual arts requires musical and artistic acumen of the highest caliber. The performers are required to develop interpersonal commitments in order to create fresh, questing, collaborative, challenging, and uninhibited work and performance trajectories. As such, these compositions necessitate concentrated rehearsals to create substantive and sustainable musical creations.

Another vital compositional component is the construction of musical instruments and sound sculptures. By creating my musical instruments, my sonic devices, I am able to construct and/or access unusual sounds, vistas, and kinetic movements in the development of ensembles that would otherwise be impossible to achieve.

As a community-supported artist, I feel that it is incumbent upon me to aspire to be a beacon and drum major for spiritual, cultural, social, and political change and development. I conceptualize my responsibilities in society from this viewpoint as I strive to balance artistic integrity and social responsibility. For me, this balance is achieved through the stimuli of novel sound, visual arts techniques, language, materials, techniques, technologies, movement, and fresh costumes that nevertheless anchor themselves in many traditions.

Ongoing, my work is also an intended contagious communication of self, manifested in the evaluation and development of expression and self-interrogation inherent in my internal interactions, and, the interactions of and between members of the community. I want to magnify the links and the overlaps of play and work, laughter and seriousness, esoteric and generic, ethereal and earthy, mythology and pragmatism, gravity and levitation, meditation and concentration, the fine lines between child and adult, imagination and realism.

In response to the almost adversarial compartmentalization of the various artistic disciplines, my endeavor is to engage the community in a blurring of the boundaries between artistic practices, such that there is a recognizable unity, and a conscious recognition of the correlation between our treatment of art practices, and, the way we engage in and embrace planetary views that foster global progress and development. This work is nurtured by artistic interactions with individuals and the community.

The work “Songs and Stories for a New Path and Paradigm” consists of narratives, vocal and instrumental music, videos and photographs, a plethora of human thoughts and experiences that describes just how close and inextricable our fundamental platforms are as humans, and that we must seek universal input, concepts, and solutions to our challenges and problems.

This work is created as part of NOW Society’s Creative Music Series #10. From January to July 2021, 39 improvisers and 2 engineers collaborated by creating in the present, by imagining what might come and by responding. The musicians improvised in sequence in nine different cities; files moved from musician to the engineers, to the next musician and so on… The engineers created architectural master halls from the artists’ sonic and visual material, from location and space, from time folded and expanded, resulting in 36 improvised films and in the formation of new works by composer Douglas R. Ewart. The passion, generosity, vulnerability, humour and strength in these films document artists transcending separation through collaboration.

36 improvised films, released these on the TV8E online episodes from Sept 18 – Dec. 4)

new works by Douglas R. Ewart (featuring 36 musicians) in various formats to be released in September 10 and December 11 and beyond by the NOW Society

Douglas R. Ewart, Professor Emeritus at The School of the Art Institute of Chicago, was born in Kingston, Jamaica, in 1946. His life and his wide-ranging work have always been inextricably associated with Jamaican culture, history, politics, and the land itself. His father, Tom Ewart, was one of cricket’s most internationally celebrated professional umpires, eventually earning induction into the Cricket Hall of Fame. His aunt, Iris King, was a leading member of Norman Manley’s People’s National Party, and later, the first woman mayor in Jamaica.

Professor Ewart immigrated to Chicago in 1963, where he studied music theory at VanderCook College of Music, electronic music at Governors State University, and composition at the School of the Association for the Advancement of Creative Musicians. The AACM is renowned for its wide-ranging experimental approaches to music; its leading lights include Muhal Richard Abrams, Joseph Jarman, Fred Anderson, Art Ensemble of Chicago, Anthony Braxton, Lester Bowie, Kalaparusha Ara Difda, George Lewis, Malachi Maghostut Favors, Roscoe Mitchell, Amina Claudine Myers, Henry Threadgill, and many others, including Professor Ewart himself, who served as the organization’s president between 1979 and 1987.

Professor Ewart’s extremely varied and highly interdisciplinary work encompasses music composition (including graphic and conceptual scores as well as conventionally notated works), painting and kinetic sound sculpture, and multi-instrumental performance on virtually the full range of saxophones, flutes, and woodwinds, including the flutes, pan-pipes, rainsticks and percussion instruments of his own design and construction for which he is known worldwide. Professor Ewart’s work as composer, instrument maker and visual artist has long reflected his understanding of the importance of sustainable and natural materials, particularly bamboo, which serves not only as primary physical materials for many of his sculptures and instruments, but also crucial conceptual elements of some of his most important recordings, such as the widely influential Bamboo Meditations At Banff (1993) and Bamboo Forest (1990). His visual art and kinetic works have has been shown at Museum of Contemporary Art Chicago, the Ojai Festival, Art Institute of Chicago, Institute for Contemporary Art (Philadelphia), Contemporary Arts Museum Houston, Chicago’s Museum of Science and Industry, and many others.

His graphic/conceptual instrumental work Red Hills (1979), an homage to his native Jamaica, is very widely performed, and his work as performing instrumentalist has been presented in the Caribbean (Jamaica, Cuba, and Haiti), Europe (France, Germany, Italy, Holland, UK), Japan, Bali, South America, Scandinavia, and Australia, as well as the United States and Puerto Rico, and recorded on numerous labels, including his own Aarawak recording company. Professor Ewart is the leader of such important musical ensembles as the Nyahbingi Drum Choir, Orbit, Quasar, StringNets, and the Clarinet Choir, and in addition to his AACM colleagues, Professor Ewart has performed with Cedric I Am Brooks, Ernest Ranglin, Cecil Taylor, James Newton, Anthony Davis, Robert Dick, Jin Hi Kim, Alvin Curran, Von Freeman, Yusef Lateef, Richard Teitelbaum, Mankwe Ndosi, Edward Kidd Jordan, Wadada Leo Smith, Steve Lacy, and others.

Professor Ewart’s highly communitarian work as a conceptual artist is best represented by Crepuscule (1993-present), a massive participation performance coordinated by his ensemble, Douglas R. Ewart and Inventions. Strongly informed by the Jamaican Jonkunnu tradition, Crepuscule is an all-day event that is collectively created by scores of musicians, dancers, visual artists, poets, capoeira, puppeteers, martial artists, activists, elders, children and more, in streets and parks in Chicago, Minneapolis, Philadelphia, Paris, France, Guelph Canada and more. Moreover, this communitarian orientation has long included educational work in underserved communities, such as his work since 1992 in Minneapolis’s ArtStart, summer interdisciplinary arts program since its inception in 1992 and his work since 1980 at Chicago’s Urban Gateways Center for Arts Education, which was documented in the 1992 British telefilm On the Edge: Improvisation in Music.

Among his many honors, Professor Ewart was personally presented with the Outstanding Artist Award by Chicago’s first African American mayor, Harold Washington. He has received two Bush Artists Fellowships (1997, 2007), three McKnight Fellowships (1992, 1994 and 2001), among others, as well as the U.S.–Japan Creative Artist Fellowship (1987), a year-long residency in Yokohama where he studied Japanese techniques of instrument building. He has received grants from the National Endowment for the Arts, the Rockefeller Foundation, the Jerome Foundation, and others.

The New Orchestra Workshop Society (NOW) presents concerts and gatherings, improvisation workshops, establishes cultural spaces for the sharing of creative work, partners in and supports community initiatives, tours, commissions, records and publishes new works. Our events are presented in public spaces, in concert halls and in informal spaces. Our work engages diverse musical sources and artists. Our ensembles, the NOW Society Ensemble and the NOW Orchestra, are drawn from Vancouver’s foremost creative established and emerging musicians.

NOW presents free workshops for individuals with varied abilities offering space for exploration and improvisation. The first NOW workshop took place at the Western Front on April 6, 1978, facilitated by Karl Berger, the founder of the Creative Music Studio in Woodstock, NY. In that same year, the NOW presented workshops by Anthony Davis, Oliver Lake, and Sam Rivers. In 1979, weekly workshops at the Western Front began (42 that year) and the NOW Society continues the tradition of yearly workshop series at the Western Front, at 8EAST, and online with facilitators such as Luke Stewart, Jaimie Branch, Ava Mendoza, Pauline Oliveros, Eyvind Kang, Kim Myhr and Kris Davis. 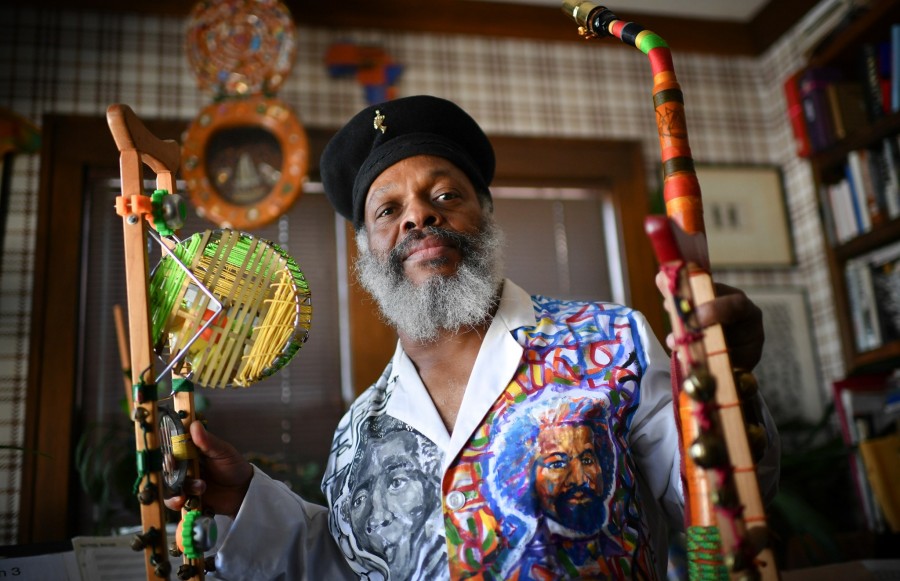