Ni De Aqui, Ni De Alla is a collective of Mexican-American lens-based artists in Chicago who use their artistic labor to raise questions of workers’ rights, immigration policy, and the horrors of American History. As children of immigrant parents, the collective work in Ni De Aqui, Ni De Alla uses photography to document the undocumented, visualize generational trauma, express gratitude towards our families, and use the camera as a tool for the visual language of labor. Just as the United States population continues to grow and increase, Latinx people are announced as the largest and fastest-growing ethnic minority group living in the U.S by 18.01%. According to the U.S Census Bureau, that is about 58.9 million residents [documented and undocumented] who identify as Latinx or Hispanic as of July 1, 2017. American history has a false narrative of “Hispanics” crossing the Mexico-U.S. border illegally to take jobs and resources from naturally born citizens. A closer examination through historical research and analysis exhibits that most Latinx/Hispanic populations currently living in the U.S. originated from Mexico. What is now known as the American Southwest (present-day Arizona, California, Colorado, Nevada, New Mexico, Utah, Texas, and Wyoming) was once Mexican-Indigenous soil. This land, our land, was lost in the Mexican-American War in 1848, which continues to impact Mexican-Americans living in the U.S. today directly.

Today, there is slow momentum with the inclusion of Mexican-American artists in established institutions. However, inclusion or acceptance is not the main priority for the artists in Ni De Aquí, Ni De Allá. As the proverb suggests, we are neither from here nor from there. We exist in the borderlands and Chicago visualizing the terrors and pleasures of our domestic lives. Taking matters into one’s hands is a mode of survival for the families represented in this exhibition. On another level, the artist takes matters into their own hands through archives, photography, and video. They award agency upon themselves and blur the lines between artisan and fine artists to craft their own history, a history that has been forcefully taken from them.

For Carol, this abstract displacement is mapped out with the inclusion and narration of her family’s nomadic archive. Sophie, a daughter of undocumented parents, questions the validity and authority of the document itself. Jennifer, with her environmental portraits, documents the flux of her domestic life. Maximiliano uses the camera as a tool to document him and his father tirelessly performing their tradition of labor. The artists in Ni De Aquí, Ni De Allá use their dual identities as Mexican-Americans to create a breathing representation of their domestic spaces. By lending the curatorial framework of Peter Galassi’s Terrors and Pleasures of Domestic Comfort (1991), Ni De Aqui, Ni De Alla subverts the baby boomers’ perspectives of domestic spaces to allow for conversations about the present Mexican-American diaspora. These conversations allow for a closer understanding of Mexican-Americans experiencing the horrors the United States government bestowed upon them. It is vital for these works to be in exhibition spaces across the nation for conversations for the Mexican-American diaspora to unfold. 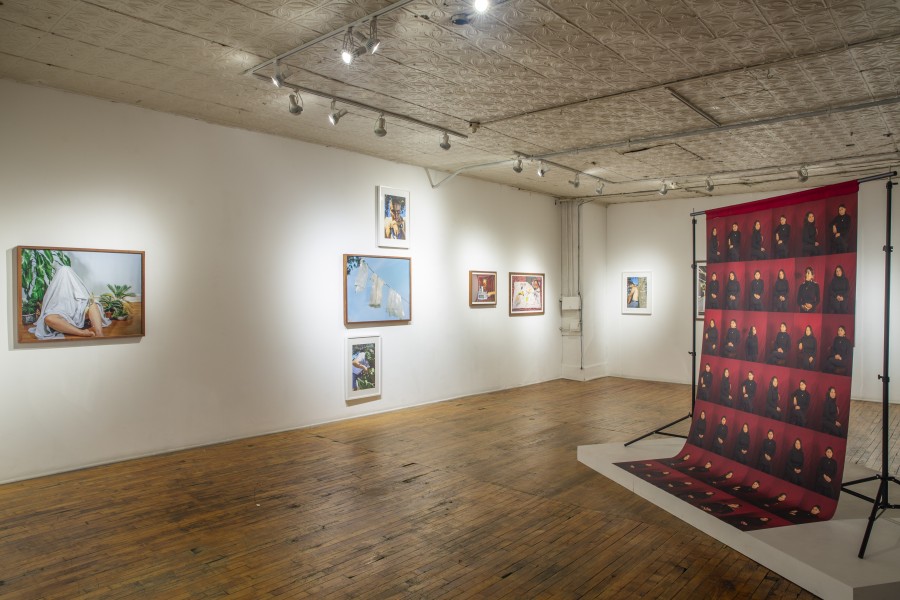