Bruce McClure is a licensed architect living in Brooklyn, NY. In 1994 he began working with stroboscopic discs as an entry to cinematic pursuits. Since 1995 his film and live projector performances have been exhibited at numerous venues and festivals around the world, including the Rotterdam International Film Festival, the Toronto International Film Festival, the New York Film Festival’s “Views of the Avant-Garde,” the Whitney Biennial, the Walker Art Center, the Wexner Center for the Arts, as well as in the UK, Italy, Australia, and elsewhere. Locally, he has performed at Chicago Filmmakers and at the Film Studies Center at the University of Chicago.

FYLFOT – TOWER of the Winds – – – Chamber scene. Boxed. Ordinary bedroom set.
Slipping through those and playing down from the conning towers all differing as clocks from keys since nobody appeared to have the same time. Rotables, have quadrants in it’s title chances to long on but stands up to legs is escape master-in-chief from all sorts of places broached by the spin of towers amid the lampless. Casting swan beams on sends whispers up frau-frau’s frou-frous; arranging tumblers on table. Ah ho ! Fontmouther. Baublelight belching out interrogation: How do you do that? Pass the poker, please? And bids him tend the lute and airly. Sing, sweetharp, thing to me! The pump and pipe pingers are ideally reconstituted. All the presents are determining as regards for the future the how-abouts of their past absences which they might see on at hearing could they find values for them. The must over listingness with the radio beamer tower and its hangars. Flashing down the swans way, leaps ahead of the swift redfellows and the pursewinded carpers, to pipe musical airs on numberous foremost through all my exam hoops. In close time, fair, free and frolicky, zooming top hole on the mart as a factor. Hat yourself! Where’s your watch keeper? You’ve seen all sorts in shapes and sizes, marauding about. Breeze softly. But where do we get off, chiseller? Now, the doctrine obtains, we have occasioning cause causing effects and affects occasionally recausing altereffects. Put me down for all ringside seats. I’ll light your turn about so to speak of beauty scouts in elegant pursuit of flowers, searchers for tabernacles and the celluloid art! Happen seen get your air. Flap, my Larrybird! Thinking himself into the fourth dimension and place the ocean between his and ours. For them four old windbags to be blowing at. Until it’s the time. Let your motto be: “Among clouds a splendor.” Number clouds. Chamber scene.

The Fortieth Day is the duo of Isidro Reyes and Mark Solotroff, both key players in the heavy-electronics outfit BLOODYMINDED, a band known for its aggressive and confrontational live shows. Solotroff is also known as the vocalist in the doom/shoegaze band Anatomy of Habit. In The Fortieth Day, Reyes and Solotroff utilize guitar, bass, drum machine, and analog synthesizer to create epic, blackened, psychedelic-industrial drone soundscapes, likened to “sustained, withering blasts of high-pitched noise that are as distinct from one another as spotlights sweeping across the night sky; jackhammer clatter, jet-engine whines, and forlorn keyboard melodies dart in and out of those huge sounds with the grace and impunity of plovers picking a crocodile’s teeth” [Bill Meyer, Chicago Reader]

Lisa Slodki creates real-time performances and installations, often working in collaboration with the Chicago experimental audio and noise communities. Performing with The Fortieth Day under her Noise Crush moniker, Slodki generates VHS tape loops which are mixed live through a battery of VCRs to construct evolving projected superimpositions. Pulsating light of decaying VHS tape and manipulated found footage conjure familiar yet indiscernible images, engaging with the fragility of both medium and memory. 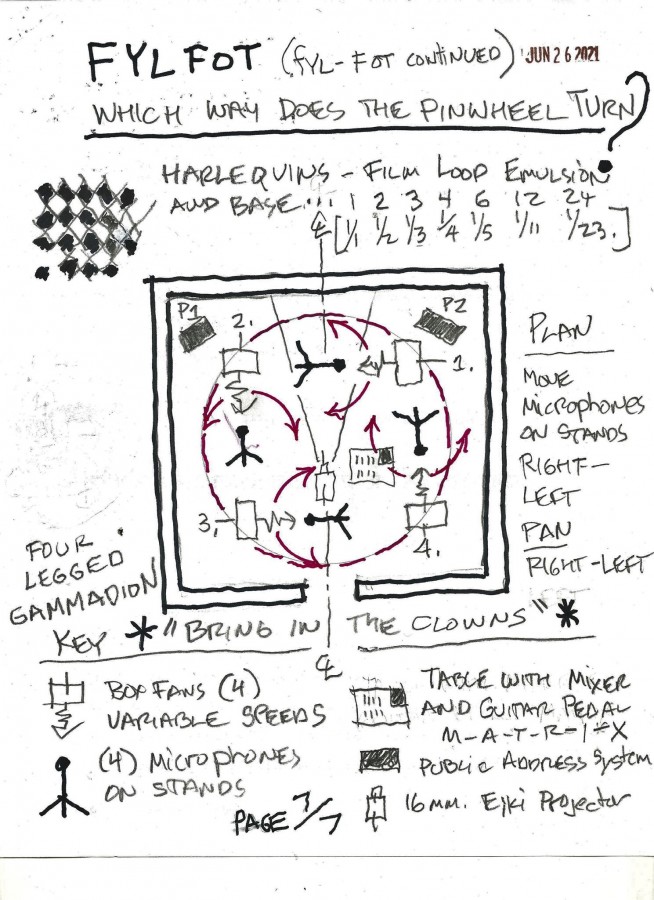