On view through Saturday, August 21st

“Daltonism,” which runs July 24-August 21 at Vertical’s 1016 N. Western Ave. location, represents the first exhibit in 10 years to showcase ROA’s original drawings. It’s also the artist’s Vertical Gallery debut, and signals his first return to Chicago since Vertical brought him to the city in 2017 to paint a mural at the Lincoln Yards development. The exhibit opens Saturday, July 24 from noon to 6:00 pm.

ROA is renowned across the globe for his monochromatic, nature-themed murals: towering, highly detailed portraits of birds, reptiles, rodents and other species native to the locations he paints. “Daltonism” takes its name from an alternate term for protanopia, the most common form of color-blindness — a fitting title not only given ROA’s career-long adherence to painting in black and white, but also because color-blindness is so prevalent throughout the animal kingdom.

Many of ROA’s most compelling works celebrate nature’s survivors and scavengers — the non-human inhabitants who thrive in their urban milieu despite the hostility of their human counterparts. “Exploration of nature, more specifically of the animal world, can lead to increased empathy,” ROA said in 2017. “It teaches you something substantial about how one should live a good life.”

ROA works directly on the buildings he paints, eschewing crutches like projections and sketches, and allows the site’s architectural details to inform how he illustrates each creature — for example, portraying different species perched atop vertical ledges, or bringing to life a supine alligator whose tail scales a fire escape.

Little is known about ROA, who grew up in Ghent, Belgium but absorbed profound formative influences from American pop culture, in particular graffiti and hip-hop. After honing his craft under bridges and on abandoned warehouse walls throughout his hometown, ROA attracted international attention for his contributions to street art festivals across Europe, and in 2011, he was featured alongside Banksy, Shepard Fairey, Invader and others in “Art in the Streets,” the landmark street art exhibition at the Museum of Contemporary Art in Los Angeles.

ROA has gone on to paint murals in destinations like London, New York, Berlin, Warsaw, Madrid, Moscow, Mexico City and Paris. In 2019, his murals were featured in the career-spanning monograph Codex. Vertical Gallery will mark the book’s official U.S. release by selling copies signed by the artist. 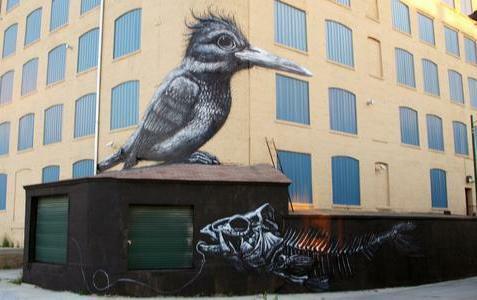