On view through Friday, July 16th

Soccer Club Club is pleased to announce a reception on Friday, July 9th for vaccinated guests! Please provide proof of vaccination (photo or card) at the door to ensure the safety and health of everyone—we can’t wait to welcome you to the space once again.

Drag City/Soccer Club Club, in collaboration with Currency, is pleased to announce Currency @ Swiss National Bank, Zurich, a two-person exhibition by Danny Bredar and Leah Ke Yi Zheng. This exhibition originally inhabited the Swiss National Bank in Zurich and has been re-realized for the context of Soccer Club Club in Chicago. Currency is a groundless and fictional gallery, invented in the first months of the pandemic as a response to the placelessness and crisis of presence become rampant. Bredar and Zheng’s prior Currency exhibition was held in Münster, Germany, adjacent to the Ruin Your Life tattoo parlor.

Bredar has been obsessed with the Velázquez painting Kitchen Scene (c. 1619) in the Art Institute of Chicago since 2017. In a eureka moment, he discovered that there is a self-portrait reflection of Velázquez in the concave brass bowl, a silhouette that is unmentioned in the art historical literature. Garlic skin is adhered to this prime sequence of 11 paintings.

Zheng arrives at unknowable aporias within the baroque folds of the curtain motif. Irregularly shaped silk paintings submerge the surface of interpretation. The industrial revolution and the beginning of algorithmic capitalism churn at this level. Indirect deviations prompt a skeptical gap from the propaganda of technological progress.

Grayscale photographs depict an interior in the Swiss National Bank, Zurich with some of the same works on display. The oscillation of appearance and disappearance resounds in the artists’ attempted reorganization of our psychomodernity. The ideology of superficial consumption is heartbreaking to them.

Under the paving stones, the sky. Cryptic and hermetic entities offer an intricate density within the Currency apparatus, a dialogical thirdness between two artists exchanging ideas and signals. As Broodthaers absorbed the museum, they absorb the convention of international exhibiting in order to anticipate and appropriate assimilation-of-critique as a tool and implement it against its own system. Good luck. 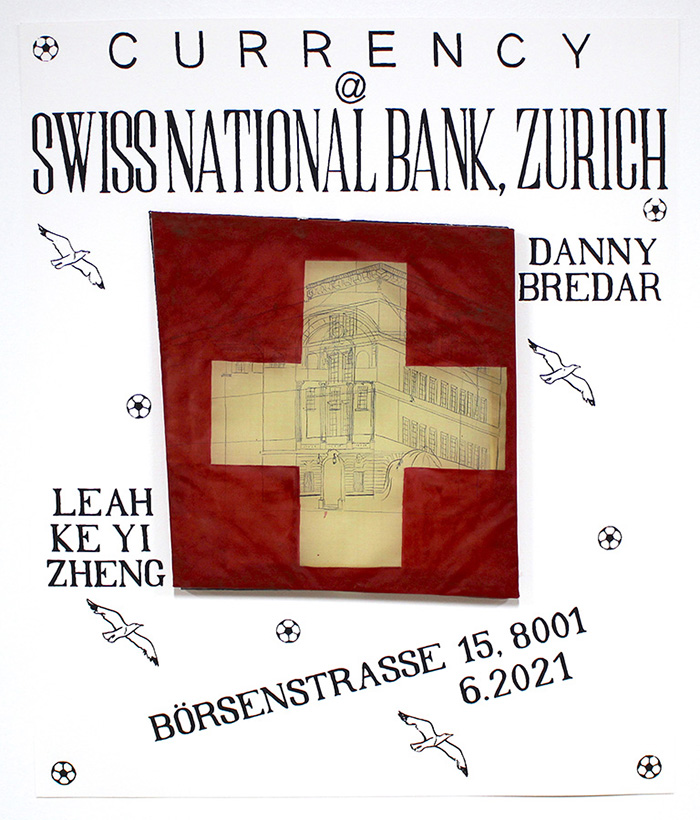