On view through Saturday, August 14th

Mariane Ibrahim is pleased to announce the upcoming solo exhibition of Japanese artist Yukimasa Ida, entitled “Here and Now” on view, in Chicago, from June 26 – August 14, 2021. The show marks the artists debut in the United States.

In the new body of work for “Here and Now”, Ida is focused on life and death as an eternal cycle and includes distorted portraits and bronze sculptures of human heads. Ida continues to experiment with spontaneous as well as intentional patterns. Each of his works merge various intensities of stroke, communicating specific ranges of emotion. Every piece embodies a snapshot of a memory, reflecting the way the human mind processes a fleeting moment…construed and inconsistent.

His main concept is “ICHI-GO ICHI-E,” an idiom describing a cultural concept of treasuring the expression and unrepeatable nature of a moment. The works presented act as daily journals reflecting his life exploration of “ICHI-GO ICHI-E.

The artist takes advantage of the drastic textures one can utilize with his medium (oil and acrylic on canvas, panels and bronze). Glimpses of realism are subtly identified and intentionally buried under heavy layers pigment, the variation of color and lengths of strokes orchestrated chaotically. The continuous changing of the rhythm in his works challenges his audience as well as invites them to either interrogate or be consumed by the madness portrayed.

Ida emphasizes, “In this ever-changing world, things and individuals are scattered, yet remain unknowingly connected, shaping the world as it exists today. People exist in the past and present, the here and now, each forging their own stories. My practice gathers miraculous encounters of humans, my intention being to crystallize them on the canvas based on realities I capture.”

The work is an expression of the bond between a motif and the canvas, the meaning of being that makes an existence. The audience’s emotions challenge the preserved memory to excavate itself, allowing his audience to see the unfiltered world of emotions that make up an image.
Related artist 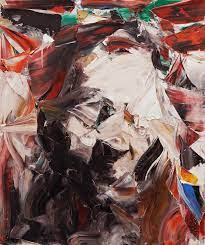