This program will be held virtually on Zoom. Please register for free in advance here.

In Sweet Bitter Love, an exhibition opening May 28 at the Newberry, artist Jeffrey Gibson (a member of the Mississippi Band of Choctaw Indians and of Cherokee descent) upends long-standing aesthetic tropes that have reinforced pernicious myths about Indigenous people for centuries.

Join us for a conversation between Gibson and anthropologist Sven Haakanson. The Newberry’s Blaire Topash-Caldwell will moderate the discussion.

In 2019, Jeffrey Gibson became a MacArthur Fellow (the “Genius Award”), for “melding indigenous North American materials and forms with those of Western contemporary art to create a new hybrid visual vocabulary and prompting a shift in how Native American art is perceived and historicized.” Sven Haakanson’s 2007 MacArthur Fellow award recognized his work in “reviving and giving contemporary meaning to indigenous languages, customs, and culture in an isolated region of North America.”

Gibson’s and Haakanson’s mutual interests in materiality, objects, and material culture will drive this conversation.

Jeffrey Gibson (Mississippi Choctaw-Cherokee) is a multidisciplinary artist and craftsperson based in Hudson, NY. His artworks, which are held in the permanent collections of many major art museums, seamlessly merge artifacts like powwow regalia, 19th century parfleche containers, and drums with elements of Modernist geometric abstraction, Minimalism, and Pattern and Decoration. Gibson sits on the Andy Warhol Foundation Board and the Participant INC Board, and he is a Governor for the Skowhegan School of Painting and Sculpture and a faculty member at Bard College. He earned his BFA at the Art Institute of Chicago, before completing graduate studies at the Royal College of Art in London.

Sven Haakanson (Alutiiq), Associate Professor of Anthropology at the University of Washington and Curator of North American Anthropology with the Burke Museum, straddles worlds in an effort to preserve and give contemporary meaning to Native history and local legends, rituals, and customs. From 2000 to 2013, he served as executive director of the Alutiiq Museum in Kodiak, Alaska, and adjunct professor at Kodiak College. He also is the former chair of the Alaska State Council on the Arts. He studied at the University of Alaska Fairbanks and completed his PhD at Harvard University.

Blaire Topash-Caldwell (Pokagon Potawatomi), is Public Humanities Fellow in the D’Arcy McNickle Center for American Indian and Indigenous Studies at the Newberry. She earned her PhD in Anthropology at the University of New Mexico. Her research interests include Indigenous futurisms, climate change, science fiction, traditional knowledge systems, and Indigenous counter-mapping.

This program is cosponsored by the D’Arcy McNickle Center for American Indian and Indigenous Studies at the Newberry.

The Sweet Bitter Love exhibition is an initiative of Toward Common Cause: Art, Social Change, and the MacArthur Fellows Program at 40, organized by the Smart Museum of Art in collaboration with exhibition, programmatic, and research partners across Chicago.

Your generosity is vital in keeping the library’s programs, exhibitions, and reading rooms free and accessible to everyone. Make a donation today.

This virtual program is free and open to all. Reserve your free tickets now. 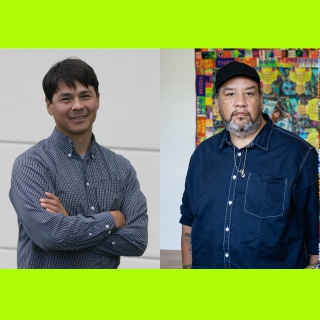