On view through Saturday, August 7th

Corbett vs. Dempsey is thrilled to present Twin Voids, featuring recent work by Cauleen Smith and Shannon Stratton. From a basic starting point in drawing, Smith and Stratton both began by working into existing printed images, painting over them in watercolor. In Stratton’s case, this involved old books of images of furniture, compendia of Victorian chairs and beds, their intricate ornament interrupted – in many cases frankly violated – by a swirling dark vortex. In some of the works, all made as part of what she calls “The Book of Voids, 2020,” the painted form droops from a wicker seat, elsewhere clumping off center on a sofa or vibrating like a forcefield in front of a credenza. Smith sees Stratton’s highly intuitive works as “a form of journaling,” perhaps a sort of brace against or chronicle of their desultory year. Strangely emotional, they contain a panoply of resonances out of scale with the simplicity of their conceptualization and execution. “The voids were records of the strangeness of both presence and absence when negotiating relationships of all kinds during an extended liminality,” says Stratton. Smith’s pieces are what the artist calls “shelf drawings” – a group of small-scale wall-hanging sculptural objects that function as little curated dioramas in which a page from an architectural/home interior/furniture magazine creates a backdrop for staged objects, which are placed on a shelf at the base of the frame. Fantastic biomorphic and crystalline shapes are drawn into the dehumanized scenarios of the magazine, akin to Georges Hugnet’s surreal Spumifers – abstracted sci-fi personages sitting in mid-century modern swivel chairs and leather loveseats. The physical objects that offset these drawn interior scenes include actual crystals and rocks, along with other items like a dried corn cob and sticks of bright pastels. Smith says the shelf drawings are “an attempt to contain a complex tension between defacement and desire.” They describe a kind of fetishistic machine in which the photographic image is brought to a higher level of sensuality through defilement, further heightened by its proximity to actual reference objects, which are placed like iconic physical-visual captions – a key of sorts – for the 2-D drawn image above it. 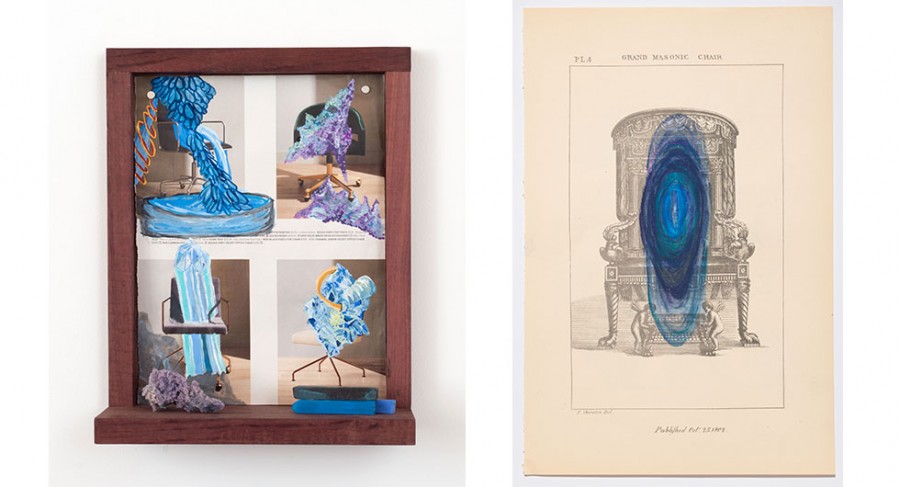