On view through Saturday, June 19th

Mariane Ibrahim is pleased to announce the first solo exhibition with ruby onyinyechi amanze, Thinghood. The show will be on view from May 7 – June 5, 2021 and will present seven new drawings. To make these works, over twenty-five different drawings were created, then cut and systematically reassembled into their finished form.

amanze is currently working with a newly reduced capsule of seven recurring elements that include: swimming pools, ada and audre – who masquerade as swimmers/divers, dancers and pseudo lovers – windows and other architectural references, okada [motorcycle taxis], pigeons in flight and the paper itself. amanze speaks lovingly of each of the elements as individual forms. Now having isolated them from their former cohort, they take on new meaning as the ones that stayed. Human-like beings and inanimate objects ultimately share the same function; flat forms that interact and move [play] in endless configurations to create a multi-dimensional and therefore, illogical space.

amanze’s drawings are an illusion; a suggestion of an expansive unnamed world situated between nowhere and everywhere. Primarily using graphite, fluorescent inks and photo transfers, each layer of space within the drawing has, with calculation and spontaneity, been negotiated, constructed and ultimately invented.

To build upon the layering of space within the drawing, amanze has begun to explore a process of creating a final work that consists of overlapping multiple sheets of paper. Taking this one step further and embracing the puzzle-like element of parts within a whole, the drawings In Thinghood come together towards the end of the process. amanze removed any semblance of knowing in advance what the works would be and opened an organic dialogue with the drawings about what they could become. With almost thirty separate units to compose with, there are virtually infinite possibilities to bend planes and disrupt logic.

Keenly interested in dance, amanze approaches drawing from a chorographic lens. Taking cues from dance composition she moves the elements across the page considering speed, angles, shapes, entrances/exits and more. She shares, “I want to heighten my role as a designer and choreographer, both of whom are responsible for the spatial arrangement of parts, a somewhat magical role steeped in revision, play and cultivating an understanding of both movement and the power of ‘empty’ space.”

In addition to dance, architecture is a key influence for amanze. Her collection of images of spaces, floor plans, architectural drawings and ongoing conversations with individuals in architectural spaces are essential elements to her creative process. There is an objective approach to the way amanze thinks and works, she looks to language such as architecture for methodologies of arriving at beauty through design and order.

Wherever there is form, there is object and existence. An object embodied by its histories is nevertheless still an object. Setting narrative aside, or perhaps laying it down wide open, amanze asks her audience to experience her arrangement of characters and objects as an open narrative. This open invitation allows the viewers to take part in constructing an ongoing narrative of this world outlined by amanze’s blended vision of architecture, choreography and fantasy. 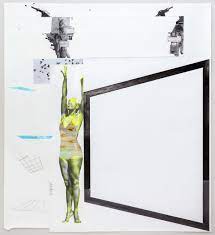