On view through Saturday, July 24th

Artist Faheem Majeed creates an ambitious new installation that furthers his investigation of culturally specific institutions by focusing on the history and memory of the historic South Side Community Art Center (SSCAC). Majeed will produce a monumental charcoal rubbing of building facade of the SSCAC as the central focus of his first large-scale solo exhibition. In addition to this new fabric work Majeed will also be incorporating his ongoing series of reused wooden planks entitled Planting and Maintaining a Perennial Garden repurposed from the SSCAC’s Burroughs Gallery. For this installation the wooden planks will take the form of a platform that will both raise the massive building sized fabric rubbing on a pedestal and be host to performance and discussion.

Faheem Majeed (American, b. 1976) is a builder—literally and metaphorically. A resident of the South Shore neighborhood in Chicago, Majeed often looks to the material makeup of his neighborhood and surrounding areas as an entry point into larger questions around civic-mindedness, community activism, and institutional critique. As part of his studio practice, the artist transforms materials such as particle board, scrap metal and wood, and discarded signs and billboard remnants, breathing new life into these often overlooked and devalued materials. His broader engagement with the arts also involves arts administration, curation, and community facilitation, all which feed into his larger practice.
From 2005-2011, Majeed served as Executive Director and Curator for the South Side Community Art Center (SSCAC). In this role he was responsible for managing operations, staff, programs, fundraising, curation, and archives for the SSCAC. During his time with the SSCAC, Majeed curated exhibitions of numerous artists including Elizabeth Catlett, Dr. David Driskell, Charles White, Jonathan Green, and Theaster Gates. Majeed received his BFA from Howard University and his MFA from the University of Illinois at Chicago (UIC).
Faheem Majeed: Planting and Maintaining a Perennial Garden IV is curated by Allison Peters Quinn. 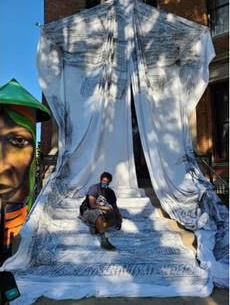