Alexandro Segade’s Mordred and Morgana – with performances by C. Bain and Ann Lauterbach

On view through Saturday, July 3rd

with performances by
C. Bain and Ann Lauterbach

{This is a VIRTUAL EVENT}

As a coordinated event between RUSCHMAN’s exhibition The Red Wedding, curated by Matt Morris, and the PTDW Spring 2021 graduate seminar We Can Learn to M/Other Ourselves, Chicago welcomes the premiere of Alexandro Segade’s Mordred and Morgana, a one act play imagining a night at home with Morgan Le Fay, sorcerous sister of King Arthur, and her son, Sir Mordred, also Arthur’s son, and rival. Performed as a reading for two performers, Segade’s text explores the fantasy genre as political discourse, a site of cultural appropriation using myth-making to explore gender, sexuality, race and violence. Mordred and Morgana recasts the villains from La Morte D’Arthur, and countless other adaptations of the founding Anglo-Saxon myth, as a revolutionary mother and son team whose place in legend deserves serious revision.

Following the premiere of Mordred and Morgana, a recording of the performance will be available for screening on RUSCHMAN’s website.

This performance is supported through an enrichment grant from the School of the Art Institute of Chicago.

Alexandro Segade is an interdisciplinary artist whose projects span video, performance, writing, drawing, and comics, using collaboration to question constructions of group identity. With these concerns in mind, Segade collaborates in art collectives, makes exhibitions and installations, directs movies and performs live. Segade’s multimedia work, inflected with mythic world-building, offers spectacular explorations of a queer utopias continually undermined by radical ambivalence. Segade has published writing on over-looked artists of the AIDS era, feminist performance art, the intersectionality of LatinX representation, and the political imagination of science fiction fan culture in Artforum, Yale Theater Journal, and Queer (Whitechapel: Documents of Contemporary Art). Segade’s graphic novel, The Context, was published by Primary Information in May 2020. He is co-host and co-producer of the podcast Super Gay! He was born in San Diego, lives in New York City.

Since 2000, Segade has worked with Malik Gaines and Jade Gordon in My Barbarian, a genre-defying performance art collective. My Barbarian has presented work in museums including MoMA (2012), LACMA (2015), MoCA LA (2009), and SFMoMA (2010), as well as festivals, galleries and public spaces internationally. A survey of the group’s two decades’ of work will open at the Whitney Museum of American Art in October 2021.

C. Bain is a gender-liminal multi- and inter-disciplinary artist based in Brooklyn, New York.
Bain’s book of poetry Debridement (Great Weather for Media) was a finalist for the 2016 Publishing Triangle Awards. His writing appears in journals and anthologies including PANK, theRumpus.net, BOOTH, Muzzle Magazine, BOAAT, them. and the Everyman’s Library collection Villanelles. His plays have been performed at the Kraine, the Tank, and Dixon Place in NYC.

She is the recipient of fellowships from the Guggenheim Foundation, the New York State Foundation for the Arts, the Ingram Merrill Foundation, and in 1995, she was awarded the prestigious MacArthur Fellowship. In 2012, she was named the Sherry Distinguished Poet at the University of Chicago. Lauterbach has also taught at Bard College, Brooklyn College, Columbia University, the Iowa Writer’s Workshop, Princeton University, the City College of New York, and Yale Graduate School of the Arts where she was a visiting core critic.

About The Red Wedding

The Red Wedding marks the nuptials between the department store and the boudoir. Grand spaces of commerce are annexed with the softening of inner sanctums, are slinking spectrally toward obsolescence, are spreading out beside Benjamin’s arcades and his dandies. Here there be psychological corridors in which the feminine is practiced, maintained, regulated. Ancillary spaces occur: an adolescent bedroom, perhaps a closet, a wedding with no groom, the transactional zones of the art and cultural marketplaces. The works assembled throb with curiosity over the ways that identity has been produced as an effect of capital and exchange. Vestiges of gender conventions and the unstable ways they have been historically mapped across the category of Womxn, lounge and languish around this public toilette. In no particular order: evening gloves, effusive perfumes, bonbon wrappers, flower bouquets, millinery, magazines, twirling ribbon, an electric vibrator, dressing gowns, gowns, protest signs, false lashes, wives’ tales, blouses. Perhaps blouses most of all. 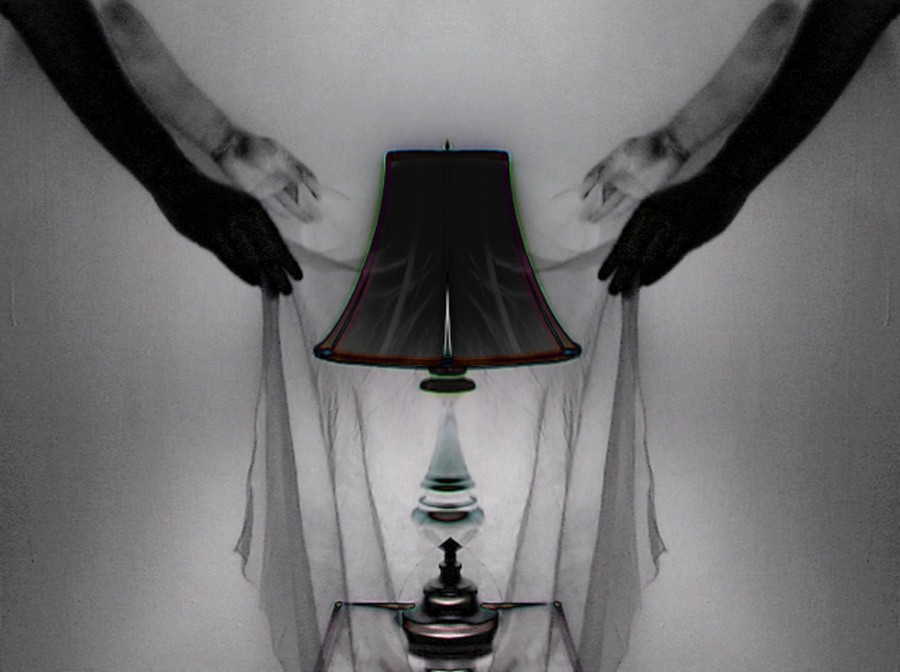