Join us as we welcome Alex McElroy and Alex Higley for a conversation about McElroy’s THE ATMOSPHERIANS.
This event will be streamed via YouTube Live. Register for free for a link to view to be emailed to you the day of the event.
A “dazzling” (Bryan Washington, author of Lot) and brilliantly satirical debut novel for fans of Women Talking and Red Clocks about two best friends—a disgraced influencer and a struggling actor—who form The Atmosphere, a cult designed to reform problematic men.
Sasha Marcus was once the epitome of contemporary success: an internet sensation, social media darling, and a creator of a high profile wellness brand for women. But a confrontation with an abusive troll has taken a horrifying turn, and now she’s at rock bottom: canceled and doxxed online, fired from her waitress job and fortressed in her apartment while men’s rights protestors rage outside. All that once glittered now condemns.
Sasha confides in her oldest childhood friend, Dyson—a failed actor with a history of body issues—who hatches a plan for Sasha to restore her reputation by becoming the face of his new business venture, The Atmosphere: a rehabilitation community for men. Based in an abandoned summer camp and billed as a workshop for job training, it is actually a rigorous program designed to rid men of their toxic masculinity and heal them physically, emotionally, and socially. Sasha has little choice but to accept. But what horrors await her as the resident female leader of a crew of washed up, desperate men? And what exactly does Dyson want?

Explosive and wickedly funny, this “Fight Club for the millennial generation” (Mat Johnson, author of Pym) peers straight into the dark heart of wellness and woke-ness, self-mythology and self-awareness, by asking what happens when we become addicted to the performance of ourselves.

Alex McElroy (they/them) grew up as an only child in rural New Jersey, moved across the country to Oregon at nineteen years old, and now lives in Brooklyn. They received their MFA from Arizona State University and their PhD from the University of Houston. Their writing has been supported by the Bread Loaf Writers’ Conference, the Tin House Summer Workshop, the Sewanee Writers’ Conference, and the Elizabeth George Foundation. THE ATMOSPHERIANS is their first novel.

Alex Higley is the author of Cardinal (longlisted for the PEN/Bingham Prize for Debut Fiction) and Old Open. He lives in Illinois. 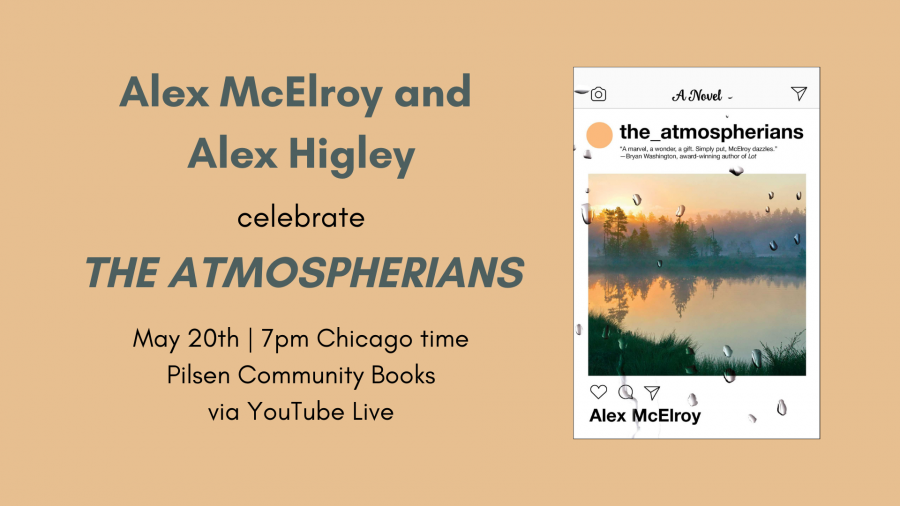