Katie Ernst
Bassist/vocalist Katie Ernst is described by the Chicago Tribune as “a versatile young bassist who plays in far-flung bands and sings with uncommon delicacy and authenticity.” She is co-leader of the adventurous Chicago-based jazz trio Twin Talk and has received widespread critical acclaim for her Dorothy Parker poetry song cycle Little Words, which premiered at the Kennedy Center in Washington, DC in 2015.

Some recent notable performances and awards include performing in Mexico City, MX for a Chicago/CDMX Improvised Music Exchange in 2020; multiple performances at the Hyde Park Jazz Festival and Chicago Jazz Festival; performing with MacArthur Fellow and renown pianist/composer Jason Moran at the Chicago Symphony Center and the Kennedy Center; receiving a composing residency at the Ragdale Foundation; representing the USA as bassist and vocalist for the 2018 EuroRadio Jazz Orchestra in Riga, Latvia; and being named a Luminarts Fellow in Jazz in 2013.

Dustin Laurenzi
Chicago saxophonist Dustin Laurenzi has developed a distinctly personal approach to improvisation and composition that has garnered the attention of the city’s creative music community. Recognized for his “offbeat approach to articulating harmonies and constructing melodies” (NextBop), Laurenzi’s music is inspired and informed by jazz, folk, and improvised music. His inventive improvisational sensibilities have made him a sought-after musician in many circles of Chicago’s vibrant music scene.

Laurenzi has been a leader/co-leader of his own projects, Twin Talk, Snaketime, and Natural Language, as well as a member of Matt Ulery’s Loom/Large, the Quentin Coaxum Quintet, and Katie Ernst’s Little Words, among others. He has released several albums featuring his original compositions, including Twin Talk’s 2019 release Weaver (37d03d), praised by PopMatters as “inventive and exhilarating.” In 2019, Laurenzi released Snaketime: The Music of Moondog (Astral Spirits/Feeding Tube Records), which features an octet of Chicago’s leading improvisers interpreting music by the iconoclastic street musician, poet, and composer. Laurenzi has toured extensively with Grammy award-winning artist Bon Iver, with performances at Coachella Music Festival, Primavera Sound, and the Hollywood Bowl, among others. He also appears on the band’s critically acclaimed 2016 release 22, A Million.

Todd Mattei is a musician, animator, and artist. Recent releases include Datasleep (Felix Onyx Records) and Meditations for Imaginations Vol. 1, which documents a series of sound meditations performed at Heaven Gallery, Chicago. He has been a member of Male, Joan of Arc, and Sharks and Seals, and has also accompanied the dance artist Victoria Bradford at Chicago Cultural Center and the MCA, among other venues in Chicago and elsewhere.

He’ll be performing a set accompanied by recent animated work.

Spectralina is the audio-visual performance project of Dan Bitney and Selina Trepp, collaborators, lovers and magicians.

Spectralina creates an image-sound relationship that treats each medium as equal, resulting in animations and performances in which projection and sounds come together as visual music.

In Spectralina Dan uses a computer, synthesizers, drums, voice and analog processors to create sounds and Selina sings, animates and plays the videolah, her instrument that creates animated projections in real-time.

Dan Bitney (American b.1964) is an American multi instrumentalist and composer based in Chicago.

Bitney is best known as an experimental musician working with jazz, electronic, rock and improvised music groups. He has released many records, has composed music for films and art installations and has performed in concerts across the world.  Bitney has been a member of Tortoise since 1994, was a founding member of Isotope 217 in the early 1990’s and has been performing as one half Spectralina since 2001.

Tortoise is credited as combining elements of jazz, rock and experimental music to create what some critics refer to as Post Rock. As a member of Tortoise and as an active participant in the vibrant music scene in Chicago Bitney has performed with Fred Anderson, Tom Zé, Lee Scratch Perry, Daniel Lanois, George Freeman, Leroy Bach, Ben Lamar Gay, Marvin Tate, Angel Bat Dawid and Tomeka Reid to name a few.

Selina Trepp (Swiss/American b.1973) is an artist researching economy and improvisation. Finding a balance between the intuitive and conceptual is a goal, living a life of adventure is a way, embarrassment is often a result.

She works across media, combining performance, installation, painting, and sculpture to create intricate setups that result in photos, drawings and animations.

In addition to the studio-based work, Selina is active in the experimental music scene. In this context she sings and plays the videolah, her midi controlled video synthesizer, to create projected animations in real-time as visual music. She performs with a varying cast of collaborators and as one half of Spectralina, her long running audiovisual collaboration with Dan Bitney. 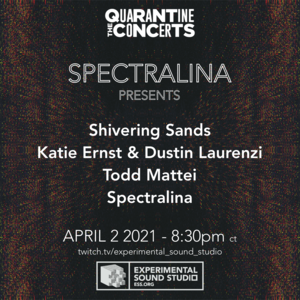