On view through Saturday, April 24th

In Ancient Japan, when political chaos and a series of natural disasters occurred, the people believed the last days of this world were near. To calm their fear and despair, they filled sacred prayer sites with bright and bold mythical flowers, believed to bloom throughout the afterlife. Those flowers were called Housouge (pronounced Housou-gae). The bigger the fear and despair, the more colorful and immense the flowers.

Unison, a series of sculptural photographic work, features my interpretation of the mythic heavenly flowers or Housouge. The blossoms are constructed from motifs scanned directly from girls’ vintage kimonos. They are both cut and then reassembled by hand, and include toy parts, plastic flowers, imitation gold, sequins, and various other objects that recall my own childhood in Japan. The use of the kimono goes beyond being just a reference to my cultural heritage, it signifies a dying cultural tradition as the use of this traditional garb has all but disappeared and is relegated to a symbolic gesture reserved for special and rare occasions. Choice of objects and toys are also direct references to my own childhood, which was saturated with objects that directly referenced American pop culture. Elements of the two opposing cultures are intertwined creating a strained and unique harmony that is illuminated through the constructed blossoms.

The ominous mood and the idea of Mono-no-Aware (the awareness of impermanence) has been cast onto my recent works, always hinting at reincarnation and it’s association with death. As a natural progression, my focus has shifted to expand and decipher the life after death. The blossoms that are threaded throughout Unison represent a vision of Bardo, where the soul floats between life and death, a state similar to the Western idea of purgatory. This in-between state echoes my own existence – a cultural hybrid somewhere between East and West.

Mayumi Lake is a Chicago-based artist. Her photography and video work delve into childhood and pubescent dreams, phobia and desires. She employs herself and others as her models, as well as dolls, toys, weapons, vintage clothes, and altered landscape as her props. 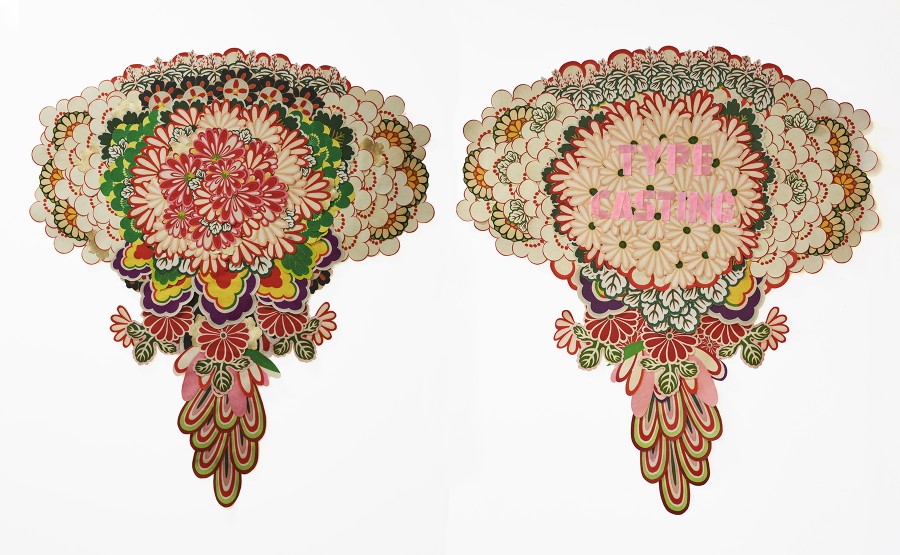