On view through Saturday, May 29th

Goldfinch is thrilled to present Damon Locks’ second solo exhibition with the Gallery. Then X Enters features new works on paper that are predominantly drawn and collaged.

At the onset of the pandemic, away from his studio and most of his materials during lockdown, Damon Locks found himself needing to make work in ways that were outside his normal path. As an electronic sound-maker, one of the most important tools in Locks’s toolbox is his sampler, which is used to create sound pieces out of collected parts. This echoes how he builds visual images. Digital and screen printing are well-trodden parts of his artistic practice, and Locks regularly uses his computer to compile, construct, and reconstruct images, tweaking them until ready for display. But now, struck with the desire to create and without access to the computer as conveyance, he began to rely on the tools at hand. Ink, brush, bamboo pen, paint, scissors, glue, drawing and tracing paper stepped in where digital design programs once stood.

Early in his career, Locks studied illustration, partly a result of his childhood fascination with comic books. That strong graphic sensibility takes the lead in this new set of works, but with an agitated quality that upsets the orderliness that the medium of illustration might usually conjure.

Then X Enters focuses on the nameless X as it walks into our lives. We live with it. We work around it. We fear it. We seek to know it. This system of drawing and collage deals in the unknown. The image builds itself one step at a time. Its stance and position must find a foothold even with shifting plates beneath it, destabilizing yet full of possibility. In the making, one cannot race ahead to see how things turn out; one can only patiently go through the transformations in time to see what new form has revealed itself, as X prepares to announce its intentions.
Artist’s Bio:

Damon Locks is a Chicago-based visual artist, educator, and vocalist/musician. He teaches art with Prisons and Neighborhood Arts/Education Project at Stateville Correctional Center. He is a recipient of the Helen Coburn Meier and Tim Meier Achievement Award in the Arts as well as a 3Arts Awardee. He is a Soros Justice Media Fellow. Damon leads the group Black Monument Ensemble and is a founding member of the group The Eternals as well as the primary vocalist in Rob Mazurek’s Exploding Star Orchestra.

Due to continued health concerns related to Covid-19, we will not hold an opening reception. Goldfinch remains open by individual, 30 minute appointments only, with a maximum of six persons in the gallery at any one time. Visitors are required to wear a mask throughout their visit (we can provide one if needed). 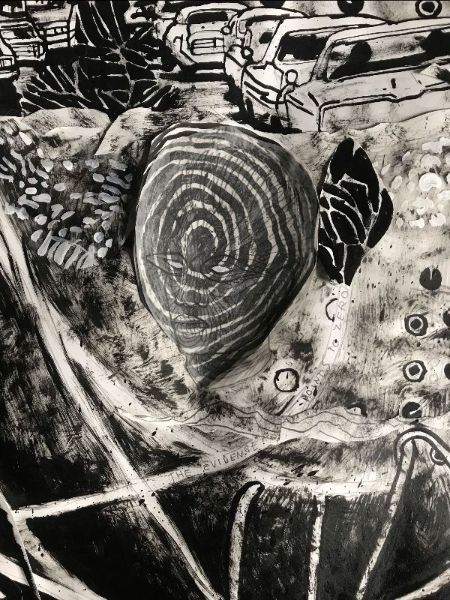