On view through Friday, March 26th

Don’t miss the closing reception and artist talk for Dream On by Mel Cook and Kailyn Perry on Friday, 3/26, at 7 PM. The artist talk will begin at 7:30 PM and the gallery will be open until 9 PM. You can RSVP at belonggallery.com.

Dream On features two painters whose bodies of work simultaneously focus on the foreboding sense of anxiety that accompanies being a woman. Both Mel Cook and Kailyn Perry use a saturated palette that often feels femme, bright and colorful—a marker of naïveté and otherness. The paintings use beautiful and seductive imagery that the viewer often becomes lost in before they realize that they are in the presence of something darker. Navigating the boundaries between illusion and truth, hysteria and trauma, Cook and Perry’s work excavates a range of everyday experiences. The paintings draw connections between architecture, bodies, language, through gestural marks that articulates and questions moments of systemic silence and violence. Together, “Dream On”  is asking us to dream while also critiquing the ability to escape.

Perry makes work varying from nostalgia to paranoia while exploring the storytelling elements of painting. She is interested in using empty cityscapes, dramatic angles, and proportions that make the audience feel like a voyeur to other’s experiences.The paintings depict everyday life of a woman’s body inside a city and universe that was designed for men. Famous Chicago architecture is contrasted with the artist’s inner thoughts and feelings. At first, these emotions seem to be the most absurd elements of the narrative, however Perry aims to confront the viewer with another absurdity: the violent constraints of everyday architecture and how it is used to silence those who are less privileged.

Visually, Cook is influenced by children’s illustrations, storybooks, and cartoons. Her imagery comes from this source material that often serves as visual pedagogical tools where toxic ideas of femme identities and otherness are often depicted and addressed for the first time in childhood. Her paintings explore the relationship between language and femme bodies being pushed up against systems of (re)production. Cook’s work charts the ever expanding constellation of misogyny focusing on topics such as reproductive justice, state sanctioned violence, and looking back at the historical markers that have led us to this place in time. The paintings feel tender, yet facetious while playfully pushing the viewer into familiar and uncomfortable moments of psychic turmoil.

Kailyn Perry  was born and raised in Massachusetts and received a BFA in Art History and Painting from Massachusetts College of Art and Design in 2013. She currently lives and works in Chicago, Illinois.  She attended The London Summer Intensive, an artist residency at Slade School of Fine Art at University College London in 2018. Her work has been exhibited at many Chicago galleries including Andrew Rafacz Gallery, baby blue gallery, and Heaven Gallery. Kailyn has also shown at the Camden Arts Centre in London, The Neon Heater in Findlay, Ohio,  and at a pop up exhibition featuring the Chicago Imagists at 56 Downing St Brooklyn NY. Kailyn’s work has been reviewed in The Chicago Tribune, ArtNet, Artsy, Art News, and NewCity.

Mel Cook is a visual artist currently living and working in Chicago, Illinois. She received her BFA from Bowling Green State University (2009) and her MFA from Illinois State University (2012). She attended Skowhegan School of Painting and Sculpture in 2016.

Cook has been an artist in residence at Lazuli Residency, ACRE, and The Center Program at Hyde Park Arts Center, Chicago, IL. Public Collections include The Joan Flasch Artist Book Collection at The School of The Art Institute of Chicago, The Polsinelli Art Collection and David Beitzel Fine Arts in New York, NY.  Cook’s work has been reviewed in The Chicago Tribune, Artsy, Chicago Woman Magazine, Artnet News, Vagabond City Lit, and Sixty Inches From Center. 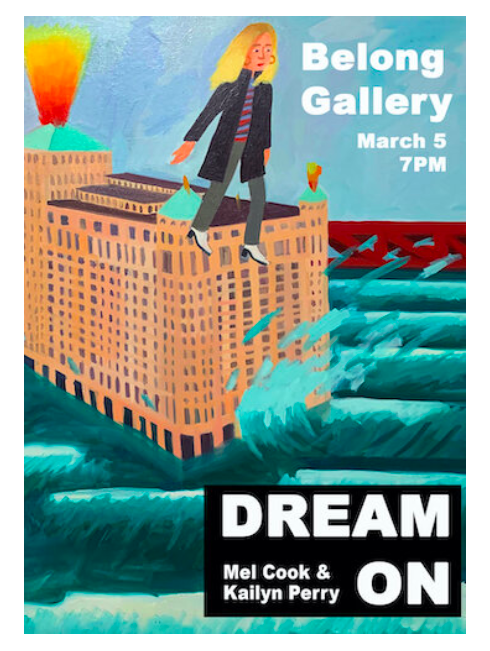