Join us on Women & Chldren First’s Crowdcast Channel for the virtual paperback release of Everywhere You Don’t Belong by Gabriel Bump. Bump’s debut was recently named a New York Times Book Review Notable Book of 2020 and a Chicago Public Library Best Book of 2020. In addition, Bump was just awarded the 2020 Ernest J. Gaines Award for Literary Excellence. For this event, Gabriel will be in conversation with Melissa Faliveno.

Claude just wants a place where he can fit. As a young black man born on the South Side of Chicago, he is raised by his civil rights–era grandmother, who tries to shape him into a principled actor for change; yet when riots consume his neighborhood, he hesitates to take sides, unwilling to let race define his life. He decides to escape Chicago for another place, to go to college, to find a new identity, to leave the pressure cooker of his hometown behind. But as he discovers, he cannot; there is no safe haven for a young black man in this time and place called America.

Percolating with fierceness and originality, attuned to the ironies inherent in our twenty-first-century landscape, Everywhere You Don’t Belong marks the arrival of a brilliant young talent.

Gabriel Bump grew up in South Shore, Chicago. His nonfiction and fiction have appeared in Slam magazine, the Huffington Post, Springhouse Journal, and other publications. He was awarded the 2016 Deborah Slosberg Memorial Award for Fiction. He received his MFA in fiction from the University of Massachusetts, Amherst. He lives in Buffalo, New York.

Melissa Faliveno is the author of the debut essay collection TOMBOYLAND, named by NPR, New York Public Library, O, the Oprah Magazine, and Electric Literature as a Best Book of 2020. Her essays and interviews have appeared in Esquire, Paris Review, Bitch, Ms., Lit Hub, and Brooklyn Rail, among others, and received a notable selection in Best American Essays. The former senior editor of Poets & Writers Magazine, she has taught nonfiction writing at Sarah Lawrence College and is the 2020-21 Kenan Visiting Writer at UNC–Chapel Hill. www.melissafaliveno.com 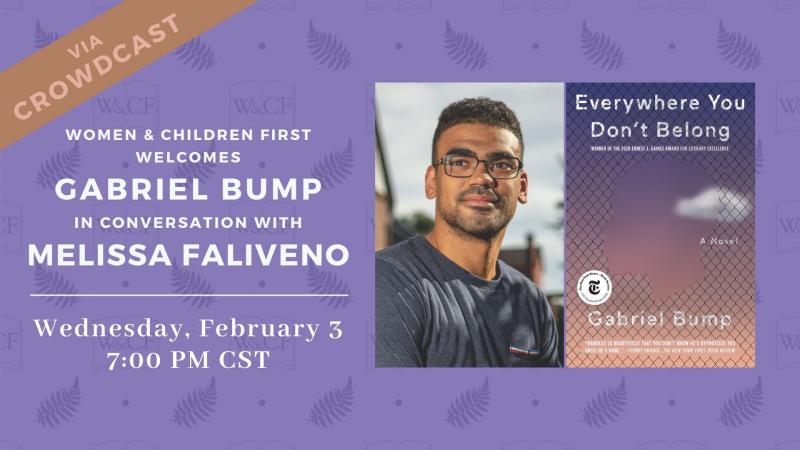