ANDREW RAFACZ is pleased to announce Brati’s Throne, a two-person exhibition of new ceramic works by Nick Makanna & Maryam Yousif in Gallery One. The exhibition continues through Saturday, April 10, 2021. This is both artists’ first exhibition with the gallery.

Nick Makanna and Maryam Yousif present Brati’s Throne, a collaborative exhibition that combines their distinct but synchronous sculptural ceramic practices, bringing together the representational, Mesopotamia-influenced work of Yousif with the architectural stacking works of Makanna.

Brati’s Throne marks the second time Makanna & Yousif have collaborated on an exhibition, with the title taking inspiration from each of their respective bodies of work. Brati translates to ‘my daughter’ in Assyrian, the language of the indigenous people of modern day Iraq, a diasporic community to which Yousif belongs. Throne refers to the spindly and structural work of Makanna, which combines his references to gothic architecture, campy sci-fi and heavy metal aesthetics.

The presentation of Brati’s Throne centers on a multi-tiered, pyramidic structure that supports several dozen ceramic works by Yousif. The tier nearest to the ground contains a ring of sculpted date palms, a tree that is native to the artist’s homeland. The middle tier holds a series of ceramic bags, referencing the mysterious forms carried by winged gods in ancient Babylonian bas-reliefs. These forms serve as a template for Yousif’s colorful and folkloric female-centered imagery. At the top of the ziggurat is a towering queen-like figure, boxy in shape, both echoing the structure upon which the figure sits as well as the conical votive figurines found in ancient temple ruins. Her brightly glazed ceramic dress, however, suggests a contemporary sense of fashion, bringing a more personal and present narrative to the work.

Surrounding the ziggurat are new stacking works by Makanna, from the artist’s continuing Rune series, influenced initially by abandoned industrial spaces and the rapidly evolving landscape of the artist’s native San Francisco. Densely constructed and equally colorful, these crudely delicate lattice structures have their own logic. Working with a bodily scale, they assume their own unique figurative role. The largest of the works at 5 feet in height, consists of three stacked sections, each one comprised of a pattern that is layered threefold, creating an odd, optical space. The series’ name is a play on the word ruin, while also referencing the eponymous ancient alphabet. Makanna’s hand-squeezed coils appear again in wall-mounted archway-shaped window grates that are backed with transparent, colored Plexiglas, suggesting a foreboding space lying beyond the gallery’s walls.

Makanna and Yousif recently relocated to Chicago from the Bay Area, where both artists have been influenced by its rich ceramic tradition, from the irreverent gestures of Funk ceramics to the pioneering lineage of auteur ceramicists of the California Clay Movement, such as Viola Frey, Peter Voulkos, and Ron Nagle. 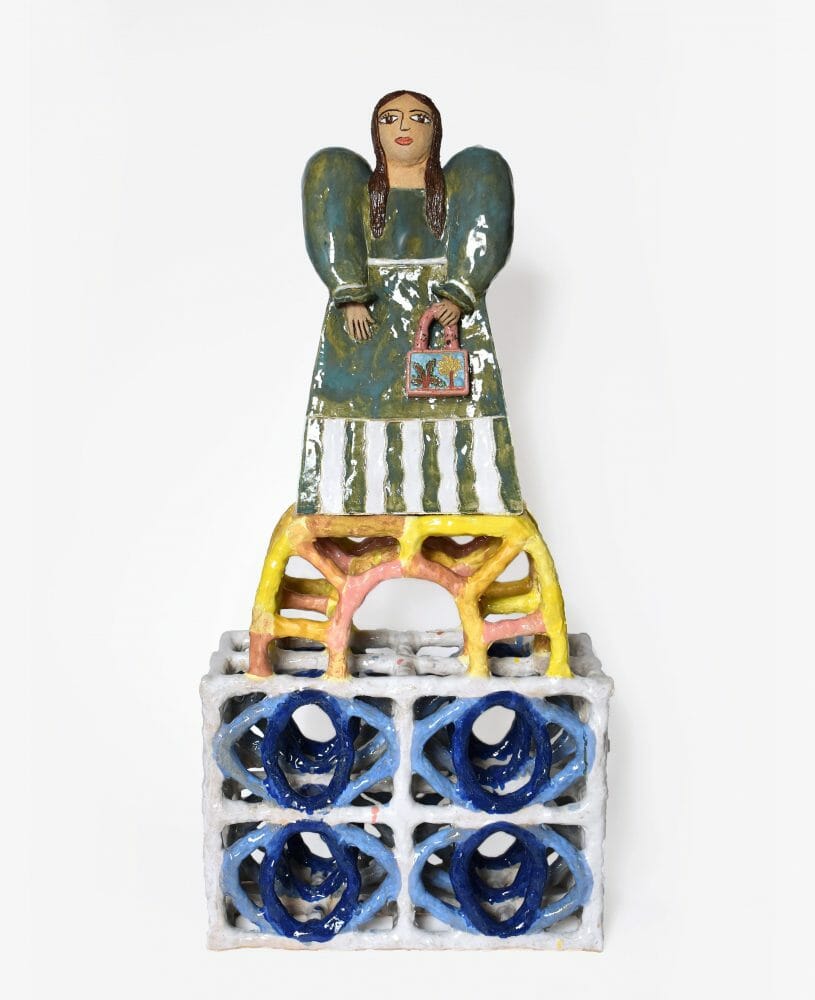