DOCUMENT is pleased to present Katy Cowan’s first exhibition at the gallery. The exhibition will open on February 27 and will be on view until April 10. Appointments are required to visit the gallery.

The lines in Katy Cowan’s work lead multiple directions. I am particularly fond of moments when they disappear into themselves like flavors in soup or pandemic daydreams. The work, whether sculpture or drawing, unravels its own material presence while setting in motion a cascade of associations.

Knots of lush color, ropes cast in aluminum in various stages of ravel, and the white of the page all play themselves with a theatrical, knowing wink. Everything is staged to be itself and something more.  Cowan’s use of texture, pattern, color, allusion, and composition guide the senses down forking paths where viewers find themselves inside, on, and outside the lines. The work creates its own rules regarding trompe l’oeil, fiber arts, formalism, abstraction, place and time during a year-long quarantine.
Katy Cowan’s work invites us inside her decision-making and desire to create and also break with convention. Story has it that Hermann Rorschach long debated whether the (in)famous images of his namesake test would be symmetrical or asymmetrical. It is noteworthy that a younger Hermann had considered being an artist rather than scientist and never lost his appreciation for the aesthetics instilled by his art-teacher father. In fact, the original set of ten Rorschach images were hand drawn by Hermann himself. He settled on symmetry only after studies confirmed its clinical efficacy. It seems lopsidedness points the brain down less-predictable paths.

Cowan dissects pattern and fractal repetition in order to play with viewer’s expectations. Her looping aesthetic is the antithesis of clinical. Her skillful use of figure/ground relationships revel in mutability like a hall of mirrors serves up confusion as entertainment. In Cowan’s work, tumult and composure are polar ends of the same rope. In one piece, the rope stretches horizontally in a straight line before puddling in a tangle of strands at either end. The respective puddles appear more dissimilar than alike. Still they reinforce the mirror analogy, staring at one another like siblings, buzzing with color-coded oscillations between object and idea. To be clear, the rope, strands, and puddles are all cast aluminum.

For all the work’s fluidity and intended ambiguity, there is poise and weight. References to celestial mechanics, innuendo of life unraveling on a studio or mechanic shop’s floor, color palettes that echo artworld luminaries like Hicks and Klee as well as contemporary ad campaigns all emanate from a gravitational center that may be, in the end, the artist as an idea. Cowan’s work is an artist in action, a creative response to the world, a generative disposition that returns, fresh-eyed, day after day. No end in sight.

In her 2005 book, In the Heart of the Heart of Another Country, Etel Adnans writes “To dread phone calls. To turn in circles. To watch light’s effect | on a painting. To think that the tree has grown. Follow sun spots | over it. To look through it, and discover a gigantic glass wall. | To bring one’s glance back the way one brings a boat back to | harbor. To compare the ivy to reptiles. To see mirrors.  . . .” The passage is from the chapter, To Be In A Time of War, which fashions existence as a litany of compact sentences describing more or less mundane activities taking place in the context of global strife. The piece, a response to fraught relations across cultural divides, offers solace and insight for anytime, anyplace.

Katy Cowan connects dots in a similar fashion: the rope is a thread, the thread is a path that leads me outside where heavens rotate. I return inside. Tasks await completion. Purpose drifts. There is more room for me inside the work than outside. I doubt this to be true but I continue: in one of the sculptures I see a person with billowing skirt dancing on water or, perhaps, on top of blue mountains low on the horizon. In another, I see a colorful city set in a fable or philosophical paradox regarding escape from routine—the old rope trick. In a third I see a puckish procession that is also a landscape, the environment on parade. The mood is regal and joyful but not without solemnity and self-reflection. Over and over again, Cowan’s twirling balance of cool and warm tones invites me to linger. Another moment to imagine what Rorschach would have seen in Cowan’s wriggling abstractions.

Through all the interpretive elaborations, Cowan’s materials—paper, graphite, colored pencil, oil paint, aluminum—remain present, palpable, active in the push and pull for meaning. The work glows with Duchampian humor as it reevaluates domestic arts and crafts à la Michelle Grabner. Of course, rope symbolizes a utility distinct from décor. It dries clothes, leashes pets, moors the boat, and corrals. In the spirit of self-referential play, Cowan’s ropes are lifelines that tether all the associations emanating from her carefully calculated materials.

When I asked Katy to send me documentation of the work, she adds a note to an untitled sculpture, “A hard one to photograph with my phone!” The piece she refers to measures 14 x 80 x 2”. Its breadth travels across whatever space or surface it occupies. It follows that a viewer must move along the work, along with the work and, ultimately, along with Cowan. She is perpetually present—in the paint application, color modulations, mimicry, restraint alongside whimsy, and her inclination toward unlikely dimensions that confound predetermined formats for contemporary viewing. Cowan works in future perfect where generous emotions will have kept us together.

The minutiae of human psyches is often matter-of-fact, confer Adnan’s elevating transcription of it. While the sum total is wildly unpredictable, which may be the reason Rorschach tests are more pop-culture than litmus these days. Katy Cowan’s work perches on the threshold between what-you-see-is-what-you-get and what-you-imagine-is-who-you-are.

In my ideal world there is a room filled with activity, people come and go in the midst of productive lives. Someone has placed Cowan’s 6 1/2’ rope sculpture at the foot of an open door to keep air and people circulating. This was not done hastily nor out of disrespect, quite the opposite. After thoughtful consultations, it was agreed the floor was the fitting showcase for an object cast with the help of gravity. The sculpture’s new-found utility returns purchase to the rope’s innate purpose. Fraying thread-ends radiate through the room. The result is that everyone spends more time considering the work’s implications given its new, humble context. This is my daydream, my room. I repurpose Katy’s artistic offering without apology. I locate the work in the mind’s eye in order to elevate and compliment what Cowan has set in motion. 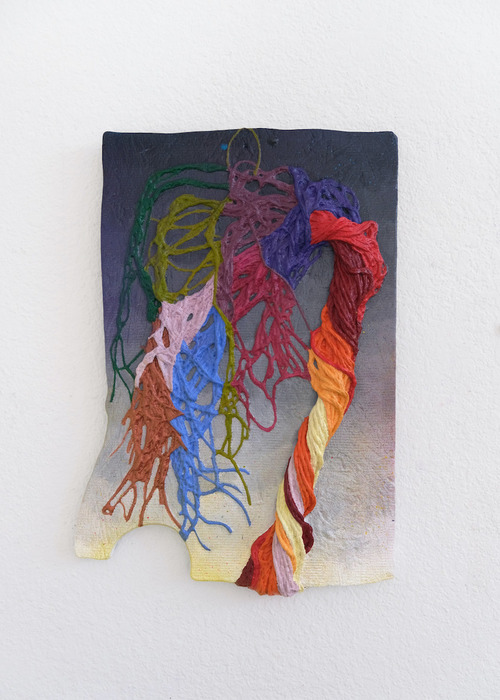