On view through Sunday, February 28th

Due to COVID-19, our capacity is limited to 25 guests per time slot, so we ask that you sign up for a viewing time to help us ensure everyone’s comfort and safety. Masks and temperature checks will be required for entry.

In Word of Fantasy, Chicago-based artist Edo presents new paintings that explore interpretations of fantasy, both physical and spiritual. After a turbulent childhood in which he lived in eight different foster homes, Edo had a revelation that he is an artist, a realization that changed his life forever. His art became a gateway to personal freedom and a means to controlling his destiny. He understood that he could make his fantasies reality and choose his own path. Ever since, he has been on a quest to heal and inspire others through his work. Colorful, imaginative and futuristic, his intensely patterned paintings pay tribute to Afrofuturism and NYC’s East Village scene of the 1980s, while at the same time feeling fresh and unfamiliar.

We are open by appointment only. To schedule a viewing or inquire about the artwork, please contact us at art@epiphanychi.com.

Edo, born Eddie Santana White, is a self-taught, multi-disciplinary artist and fashion, graphic and industrial designer from the South Side of Chicago. He attended Hyde Park Career Academy and Kennedy King College. He launched his career as a designer with top urban clothing brands Leaders 1354, Joe Fresh Goods, Treated Crew and Fat Tiger. Edo oversees a clothing line called Emperion and is the co-founder of the graphic design and screen-printing company Be Creative. His own brand is known as Infinite Inception. Infinite, meaning forever or timeless, and inception, referring to his favorite movie of the same name.

Edo made his public debut as a painter during Art Miami/Art Basel in 2018 as part of the Pigment International Miami Reveal, just one year after creating his first painting. His digital exhibition, Infinite State of Mind, was shown in Harlem in 2017, and he has been featured at the Baltimore Gallery in Detroit. He is currently expanding the Bronzeville space he co-owns called Escape Studios Chicago. His survey exhibition, Memories Museum, appeared at the Logan Art Center at the University of Chicago in 2020.

Edo has worked with After School Matters and the Walgreen’s “Expressions” arts program and has been featured on WTTW, ABC News, FOX32, Chicago Creatives, Champagne & Snark, and the Living with Sam Graham Radio Show. He has also exhibited at, or partnered with, corporations such as Google, Hyatt International, LinkedIn, Twitter and the Chicago White Sox.

Tags: Chicago, Edo, Epiphany Center for the Arts, near west side, World of Fantasy 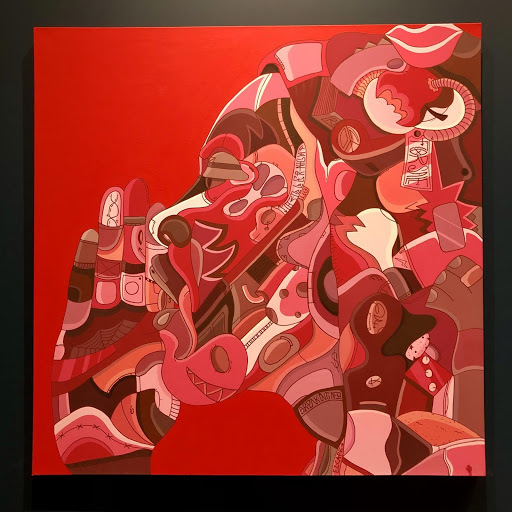