Rhona Hoffman Gallery is pleased to present The Last Resort, the gallery’s fourth solo exhibition with Brooklyn-based artist Derrick Adams (b. 1970, Baltimore, MD). Culminating the artist’s series Floaters, which began in 2015, the collection of large-scale works on paper present the final chapter in Adams’ feeling investigation into depictions of Black leisure. Each completed in 2020, six of the paintings on view renew Adams’ signature use of exuberant color blocking figuration to introduce the idle time of Black bodies in compositions that are joyous, abundant, and radical in their refusal of tragedy. Alongside these works, a number of intimate watercolors—whose treatment is loose, delicate, and soft—feature bathers resting upon fantastical inflatables of swans, unicorns, and rainbows.

Floating is an American pastime; in this sense, Adams’ Floaters are American landscapes. Joining the tradition of bathers and boaters as a painterly subject, Adams interjects representations that otherwise did not exist within the art historical canon. The five-year series was initiated in response to the scarcity of Black representation across the vernacular portrayal of water-centric leisure. Motivated in part by an article published in a 1967 issue of Ebony magazine on Martin Luther King Jr. vacationing with his family in Jamaica, the series was originally painted from source images of white figures, due to a lack of photographic material that pictured Black bodies in acts of relaxation. Over the years, Adams’ access to images has since grown to encompass a broad network of family and friends, whose ongoing image correspondences have added to the lexicon of models the artist pulls from. The title of the show references an eponymous artist retreat founded by Adams in his native Baltimore set to open in 2022. Yet as experiments in genre painting, which the exhibition title dually suggests, the last resort to resolving absence is
to introduce images and spaces into the world by your own hand.

Across Adams’ five-year output, the water that surrounds the figures in the Floaters illustrates almost no indication of environment beyond blueness. No distinction is made between swimming pool, lake, or sea. A levitation in atmosphere, the artist notes, “that could just as well be sky.” This placeless buoyance is further articulated by the bold and graphic assertion of the artist’s models’ physiques. Against these unadorned backdrops, Adams incorporates geometric swathes of bright pigment and patterned fabrics to render his floaters’ relaxed limbs, bathing suits, hair, and exultant gestures. In each, the caricature of the inflatable lounge device becomes an extension of the body itself.

In a recent survey of the series, Buoyant, which took place at the Hudson River Museum in New York, Adams’ works were installed alongside a selection of artworks in the collection curated by the artist. Among the chosen works, which included the Ebony images of “MLK’s Tropic Interlude,” the film photograph of King bears the most striking resemblance to the approach of figuration exacted among the Floaters. The image is unlike any we have ever seen of King. Dissecting the composition, his arms outstretch along the stone edge of a swimming pool; the aquamarine water is complemented by the fiery punctuation of tropical flowers and greenery that exists beyond a fence, whose white pillars rise like columns. The simplicity of the composition, pared down to the most
essential markers of place, share in the Floaters’ desire to imbue the peacefulness in leisure through the most minimal means of description.

In Floater 93 (2020), the diptych pictures the largest gathering of swimmers—two women in brazen bikinis anchor both the left and right sides of the composition; a man’s hands reach over the divide of the work to touch each of their circular platforms; and children’s arm floats bear the pattern of blue spangled stars. Each of the bodies are connected by touch; as the viewer’s eye navigates the work, it becomes clear that no one floater is left without a bond that leads to the other. Contrastingly, in Floater 98 (2020), a sole adolescent boy occupies the center of the work, upheld by a device decoratively peppered with icons from the emojicon codex. The faces—winking, grinning, tongues stuck out—are transformed from the ‘race-less’ yellow standard into hues of tan and brown. In relation to the boy’s demure smile, it is unclear if these exaggerated expressions are mocking or sympathetic.

This underlying sentiment is further evident in Floater 99 (2020), another single figure, this time of an adult male in portrait view, who seems to be either speaking or gasping for breath. His gaze looks upward at an imposingly large inflatable smiley face that looks down upon him, an almost menacing apparition. Even in leisure, the depiction of Adams’ bodies cannot escape a harrowing threat: that the potential of harm looms even in the most relaxed and mundane of spaces. 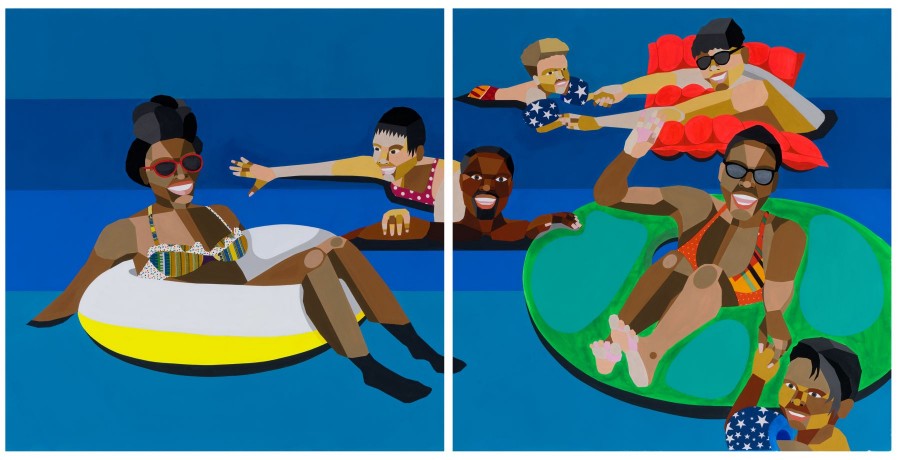