Opening in January of 2021, Kavi Gupta proudly presents an exhibition examining three key bodies of work from the pioneering Korean-American abstract painter Young-Il Ahn (1934–2020). The artist passed unexpectedly in the midst of planning this, his second solo exhibition with the gallery.

In light of the increased attention Ahn has received in recent years for his iconic Water series, this exhibition aims to expand the scholarship and recognition of two important, highly personal facets of his practice. The exhibition will explore Ahn’s Self-Reflection series, primarily executed between 2000 and 2004. The experimental, energetic series is marked by abstracted, symbolic references to autobiographical content and fragmented Korean Hangul text. The exhibition will examine these alongside a selection of memorial paintings that Ahn produced in the wake of September 11, 2001. As an immigrant to America with love for his chosen home, Ahn’s passionate response to the tragedy of the September 11th terrorist attacks is a deeply moving insight into one man’s emotional state. Both series will be shown alongside select pieces from his Water series, exploring the formal and technical parallels across his diverse bodies of work.

Born in Gaeseong, Korea, in 1934, Young-Il Ahn earned his BFA from Seoul National University in 1958, and relocated to California in 1966. He is renowned for making intricate, large-scale paintings that explore his relationship with beauty, nature and music. His work is frequently associated with Dansaekhwa, an aesthetic position specific to Korea, which expresses natural processes through a mostly monochromatic palette. Though, as a Korean-born painter who lived and worked in the U.S., Ahn was unique among Dansaekhwa artists. Recent exhibitions include the retrospective Young-Il Ahn: When Sky Meets Water, at Long Beach Museum of Art, Long Beach, California; Unexpected Light: Works by Young-Il Ahn, Los Angeles County Museum of Art, Los Angeles, California; and A Memoir of Water, Solo exhibition, Long Beach Museum of Art, Long Beach, California. Ahn’s work is held in numerous private and public collections around the world. 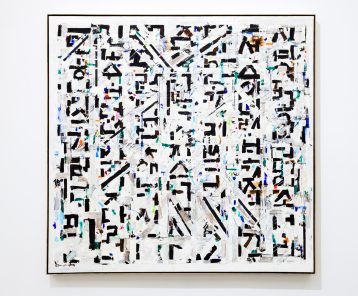