Ghanbarzadeh created 52 Sites in response to a threat President Donald Trump issued via tweet in January 2020 to target and destroy 52 iconic buildings in Iran should the nation engage in aggression against Americans or American assets, despite Geneva Convention prohibitions against attacks on sites of cultural and historical significance. The artist’s installation, comprising paper-based works in shades of white that have been meticulously perforated with hundreds of pin holes, depicts architectural elements and details of intricately patterned tiles from some of these 52 buildings, all of which are on the UNESCO heritage list.

For Ghanbarzadeh, the broken surface of the paper is a metaphor for demolition and destruction and stands in contrast to the reverence that is manifest in the act of conservation. The paper’s uniformly white surface hints at the challenges intrinsic to holding images in one’s memory, and, by extension, preserving vital connections to one’s culture.

With 52 Sites, Ghanbarzadeh seeks to raise awareness about these remarkable buildings while educating viewers about a civilization with a rich culture and peaceful history that stretches back thousands of years. 52 Sites also calls attention to the power of words and how rapidly an incendiary statement can bring two nations to the brink of war and further constrain the lives of ordinary citizens, in this case the Iranian people.

Nina Ghanbarzadeh is a visual artist and entrepreneur who takes a universal approach to written language in her art, striving to create work that bridges cultures, nationalities and ethnicities by foregrounding our commonalities. Ghanbarzadeh emigrated from Tehran, Iran in 2001 and earned her BFA from the University of Wisconsin-Milwaukee in 2013. In 2015, she completed a two-year artist-in-residency program with Redline Milwaukee. She has exhibited her work in cities throughout the Midwest, including Milwaukee, Madison, St. Paul and Chicago. In 2020, her work received a Best in Show award at the Museum of Wisconsin Art’s Wisconsin Artists Biennial. She will be featured in a solo exhibition at the museum in 2021.

OS Projects is a contemporary art gallery in downtown Racine featuring visual artists in solo and small group exhibits. The gallery’s primary focus is on artists living and working in the Chicago-Kenosha-Racine-Milwaukee urban corridor. While the range of media the gallery presents is broad—encompassing painting, drawing, printmaking, sculpture, photography, video/film and installation—the exhibited artists are unified in their engagement with topical issues, experimentation with materials and processes, and adherence to craft.

The image that accompanies this press release shows a detail of Vakil Mosque by Nina Ghanbarzadeh, paper perforated with pins, 2020. 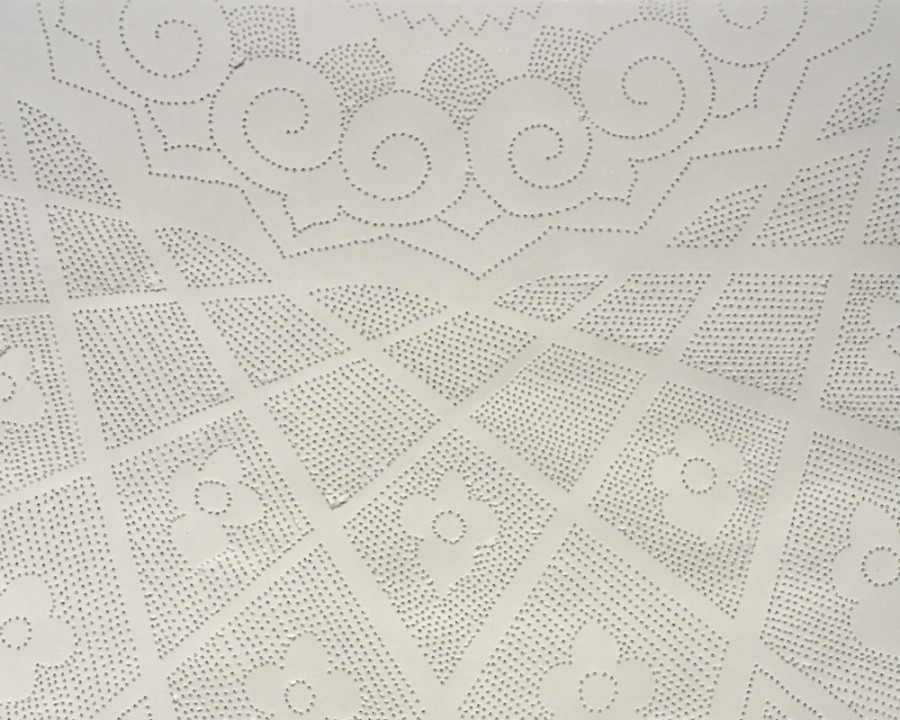