The Deportation Machine: A Conversation with Adam Goodman and Carlos Ballesteros

Join us as we welcome Adam Goodman and Carlos Ballesteros for a conversation about Adam Goodman’s new book The Deportation Machine: America’s Long History of Expelling Immigrants.

**This event will be broadcast via YouTube Live. Register for free HERE for a link to be sent to you the day of the event.**

Constant headlines about deportations, detention camps, and border walls drive urgent debates about immigration and what it means to be an American in the twenty-first century. The Deportation Machine traces the long and troubling history of the US government’s systematic efforts to terrorize and expel immigrants over the past 140 years. This provocative, eye-opening book provides needed historical perspective on one of the most pressing social and political issues of our time.

In a sweeping and engaging narrative, Adam Goodman examines how federal, state, and local officials have targeted various groups for expulsion, from Chinese and Europeans at the turn of the twentieth century to Central Americans and Muslims today. He reveals how authorities have singled out Mexicans, nine out of ten of all deportees, and removed most of them not by orders of immigration judges but through coercive administrative procedures and calculated fear campaigns. Goodman uncovers the machine’s three primary mechanisms—formal deportations, “voluntary” departures, and self-deportations—and examines how public officials have used them to purge immigrants from the country and exert control over those who remain. Exposing the pervasive roots of anti-immigrant sentiment in the United States, The Deportation Machine introduces the politicians, bureaucrats, businesspeople, and ordinary citizens who have pushed for and profited from expulsion.

This revelatory book chronicles the devastating human costs of deportation and the innovative strategies people have adopted to fight against the machine and redefine belonging in ways that transcend citizenship.

Adam Goodman teaches in the Department of History and the Latin American and Latino Studies Program at the University of Illinois at Chicago. His writing on immigration history and policy and U.S. and Mexican politics has appeared in outlets such as the Washington Post, The Nation, and the Journal of American History. Goodman is a faculty advisor to UIC’s Fearless Undocumented Alliance, a co-convener of the Newberry Library’s Borderlands and Latinx Studies seminar, and a co-organizer of the #ImmigrationSyllabus public history project. The Deportation Machine: America’s Long History of Expelling Immigrants (Princeton University Press, 2020) is his first book.

Carlos Ballesteros is an investigative reporter at Injustice Watch, a nonprofit newsroom in Chicago dedicated to covering the criminal justice system. Carlos joined Injustice Watch in June 2020 after two years at the Chicago Sun-Times, where he covered immigrant and working-class communities of color throughout the South and West sides of the city. Before joining the newspaper, Carlos was a digital reporter for Newsweek in New York and interned at The Nation and In These Times. 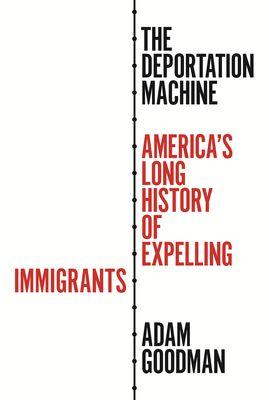