Native Studies in the Apocalypse

his program will be held virtually on Zoom. Please register for free in advance here: https://www.eventbrite.com/e/native-studies-in-the-apocalypse-tickets-128882445865

In this virtual dialogue with the Newberry’s Blaire Topash-Caldwell (Pokagon Band of Potawatomi Indians), Shannon Speed (Chickasaw) will discuss the present and future of Native American and Indigenous Studies in apocalyptic times. Native Studies, like virtually everything else, will be reshaped by the dramatic dynamics affecting the world, from pandemic pandemonium to climate change chaos, from rising calls for racial reckoning to escalating totalitarian threat. What is the current state of Native Studies? What are its longstanding tensions and contemporary challenges. More importantly, what are its potential contributions to the radical revisioning of the world that is so urgently needed now?

Dr. Shannon Speed is a tribal citizen of the Chickasaw Nation of Oklahoma. She is Director of the American Indian Studies Center (AISC) and Professor of Gender Studies and Anthropology at UCLA. Dr. Speed has worked for the last two decades in Mexico and in the United States on issues of indigenous autonomy, sovereignty, gender, neoliberalism, violence, migration, social justice, and activist research. She has published numerous journal articles and book chapters in English and Spanish and has published six books and edited volumes, including her most recent, Incarcerated Stories: Indigenous Women Migrants and Violence in the Settler Capitalist State, which won the Best Subsequent Book Award of the Native American and Indigenous Studies Association this year. She also co-edited a forthcoming volume with Dr. Lynn Stephen, entitled Heightened States of Injustice: Activist Research on Indigenous Women and Violence. Dr. Speed currently serves as the Past President of the Native American and Indigenous Studies Association (NAISA).

A citizen of the Pokagon Band of Potawatomi Indians, Dr. Blaire Topash-Caldwell is currently the Public Humanities Fellow for the D’Arcy McNickle Center for American Indian and Indigenous Studies at the Newberry. She earned her PhD in Anthropology at the University of New Mexico earlier this year. Her research interests are in Indigenous futurisms, climate change, science fiction, traditional knowledge systems, and Indigenous counter-mapping.

Presented by the Newberry Library with support from John W. and Jeanne M. Rowe. 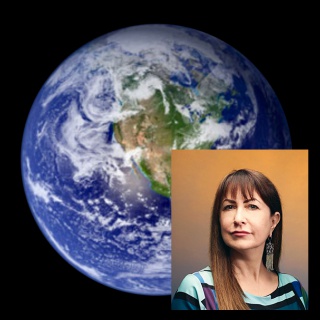