Unreal City: Film Essays on London by Ayo Akingbade and Reece Auguiste is a program of experimental essay films from the UK, the first in a series of programs exploring the legacies and futures of Black British cinema, guest curated by Northwestern graduate students Madison Ivory Alan-Lee, Gervais Marsh, and Tyler Talbott.

Starting at 7 PM Central Time on November 12th, “Unreal City” stream live on the Block’s Vimeo page, followed by a discussion with filmmaker Reece Auguiste and Tiff Beatty, Program Director of Arts, Culture & Public Policy at the National Public Housing Museum. The program will be available to watch on the Block’s Vimeo page and website for a 24-hour period. Please RSVP through Eventbrite: https://www.eventbrite.com/e/126997393623

For many, London is an imaginary landscape, a composite of images that circulate in art, literature, and popular culture. The artists in this program, Reece Auguiste and Ayo Akingbade, employ diverse strategies to peer through these images to capture the reality of London as an historical city, as the center of a once world-spanning empire, and now as a global financial hub facing an uncertain post-Brexit future. These three experimental film essays explore critical readings of London life across thirty years—under Margaret Thatcher and in the era of Brexit.

Reece Auguiste, a member of the influential Black Audio Film Collective, traces Britain’s imperial past to London’s modern physical and demographic upheaval in “Twilight City” (1989). The film combines a fictional treatment of the Caribbean subject’s experience of London and interviews with political activists and scholars of empire to explore how gentrification, segregation, and homelessness threaten the future of the city.

British Nigerian artist Ayo Akingbade draws upon the filmmaking traditions and activist practices of the UK’s recent past to shed light on the housing crisis of its present. “Tower XYZ,” like Auguiste’s work, is a meditative exploration of the current state of London, filmed in stunning 16mm.

“Dear Babylon” (2019) combines documentary techniques with a self-reflexive narrative to explore how Black, Asian, and minority ethnic (BAME) coalitions in the city can utilize the power of film to fight legislative disenfranchisement.

The films in “Unreal City” appear courtesy of LUX.

Co-presented by The Block Museum of Art with support from the Alice Kaplan Institute for the Humanities, Black Arts Initiative, Gender & Sexuality Studies Program, the Department of Radio/Television/Film, Screen Cultures Program, and the Department of Performance Studies at Northwestern University. 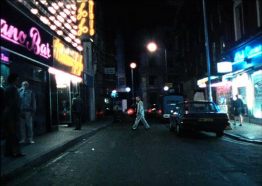