On view through Saturday, December 19th

moniquemeloche is thrilled to present of Royal Specter, an exhibition of new paintings by Kajahl, his first exhibition with the gallery and in Chicago.

Emerging within the 17th-19th centuries, Europe’s most prestigious sculptors and painters were commissioned to create depictions in the form of decorative objects known as the Blackamoor. During a time of colonial expansion and exploration, these objects satisfied and appeased the illusions of the elite and their desire to learn about the ‘specter’ residing in unknown territories, –who were these people and what did they look like? Displaying a mixture of factual documentation and pure fantasy, the artists who imaged the Blackamoor took liberties when imagining what they presumed to be these “others” from uncharted lands. In many cases the iconography was derived from written text or engravings from the distant past, the artists themselves often had no contact with the mythical subjects they were attempting to accurately characterize.

Royal Specter provides a portal into a realm where the artist’s own Royal Court of Sovereign Entities reside. Kajahl depicts this elite class of courtly nobility through the medium of oil painting. Images of the Blackamoor are used as source material, now reanimated through elegant paintings of warriors, scholars, scientists and oracles, all rendered with painstaking detail and elevated to a grandiose status. Disconnected from their original historical context, these Blackamoor sculptures are reimagined through a hybridized narrative, creating fantasy paintings about a fantasy.

Expounding the notion of inaccuracy and fantasy, Kajahl sets the stage for anachronisms and speculative fiction to lie bare, amplifying the indeterminacy of such foreign realms. Large-scale depictions of a scantily clad ‘Huntress’ figure appear astride a snarling crocodile, festooned in gold jewelry and a feathered headdress, and armed with a shield and spear in hand. While an aggrandized figure of an astronomer gazes in solitude through an elaborate astrolabe, surrounded by his celestial globe and tools to help navigate explorations through the constellations. Kajahl manipulates the raw Blackamoor material in order to create a scene that diverges in time and place, effectively creating a hypothetical world for these statues to exist as people. They are reborn as theoretical rulers in a bygone era, with Kajahl positioned as the appointed ‘court painter’ of their mythical domain.

This Royal Court of Sovereign Entities creates a complex and complicated historical myriad of reverie; Kajahl states ‘My fantasy is gazing back at their fantasy. I am their fantasy and they are mine… I am the specter of their Imagination.’

Kajahl (b. 1985 in Santa Cruz, California) lives and works in New York. Through painting, he resurrects objects that are lying dormant in historical archives. He endlessly scours and sifts through books, online images and visits museums in order to gather source material. Kajahl takes these finds from his excavations and hybridizes entities that eventually become grandiose figures. Although the characters he constructs belong to a multiplicity of time periods, locations and cultures, they foreground the forgotten past and reanimate minor artifacts of history into what amounts to a transformative assemblage. 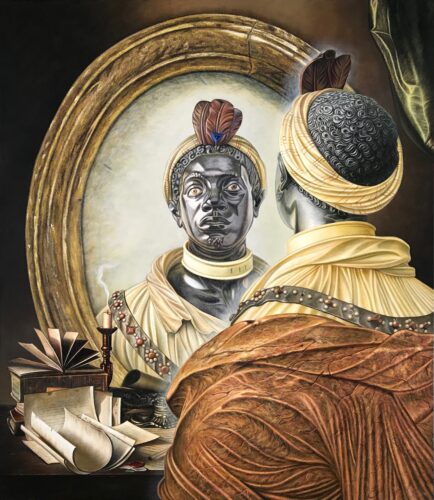