On view through Sunday, January 10th

Don’t miss 𝘐𝘯𝘵𝘦𝘳-𝘍𝘭𝘶𝘹, Epiphany Center for the Arts’ two-person exhibition by Mayumi Lake and Holly Cahill, which runs from November 6 until January 10 in The Sacristy Gallery. The exhibition explores both artists’ relationship to change and impermanence and also looks at how cultural and personal mythologies have influenced their work.

Details on how to make a reservation to attend the private November 6 (5pm – 8pm) opening reception, or view during normal business hours is available at https://epiphanychi.com/inter-flux/ or email art@epiphanychi.com for any questions or to schedule a showing.

As a Japanese immigrant who has been living in the U.S for over 20 years, Mayumi Lake makes objects that float between states: East and West, longing and hope, memories and oblivion and past and future. In Japan, an awareness of life’s temporary nature is called “Mono-No-Aware”. This acknowledgment of impermanence drives Lake to preserve the past, seeking to archive the forgotten and the obsolete. In her Unison series, Lake explores the ancient Japanese tradition of Housage (pronounced Housou-gae) flowers. In times of political chaos and upheaval, people filled sacred prayer sites with bright, boldly-colored flowers which they believed would calm their despair and bloom for them in the afterlife. Unison is an ongoing sculptural-photographic series that offers interpretations of these mythic and heavenly flowers. She constructs these blossoms using motifs taken from vintage kimonos. The use of the kimono goes beyond being just a reference to Lake’s Japanese heritage; it signifies a dying cultural tradition. Indeed, the works from Unison appear to float free from the gallery walls like dissipating clouds or fading memories.

Process and uncertainty are crucial to Holly Cahill’s practice, which she approaches as a puzzle that has many potential outcomes. By combining various methods of painting, fibers, sculpture, drawing, collage and print, she invites chance and repetition into her work as a way of loosening her grip on how it ultimately unfolds. She draws inspiration from the shared spaces we inhabit, as well as the traditions that we pass down from generation-to-generation such as quiltmaking. Rather than referencing any single place, Cahill’s sewn canvases, layered collages, and paintings featuring illuminated marks point to patterns drawn from both the natural and artificial worlds. The emergence of systems, and their eventual collapse, are central to Cahill’s art. In her Diagram series, patterns emerge from fields of color like road maps to nowhere before transforming into traces of light that fade away. Works from Study of Thorns grow out of the wall like vines seeking the sun, only to turn back onto themselves to become a thatch of abstract lines and watercolor brushstrokes.

One of Cahill’s favorite architectural forms is the portal, which is typically depicted as a device or door that enables the body to pass from one space to another. She is particularly interested in combining this idea of a threshold that can bend the rules of time and space with its counterpart in our everyday experience. Cahill believes that doing so creates a space for us to consider the possibilities of what lies beyond our comprehension while we remain connected to what we see in front of us.

Mayumi Lake is an interdisciplinary artist born in Osaka, Japan. Now based in Chicago, her work delves into childhood and pubescent dreams, phobia and desires. She employs herself and others as her models, as well as dolls, toys, weapons, vintage clothes, and altered landscapes as her props. Mayumi received her BFA with a focus in Photography and Filmmaking, and MFA in Photography, from the School of the Art Institute of Chicago. She has exhibited nationally and internationally, and has published 2 monographs from Nazraeli Press. Her work is in the permanent collection of the Art Institute of Chicago; The Museum of Fine Arts, Houston; Asia Society; Joy of Giving Something Foundation and more.

Holly Cahill is a Chicago-based multidisciplinary artist working in painting, drawing, fibers, sculpture, print, and collage. Her abstractions weave together elements of the fantastic found at the heart of our domestic and shared environments. Holly’s work has been shown at the Gaylord and Dorothy Donnelley Foundation, Chicago Artist Coalition, Heaven Gallery, Pennsylvania State University, DEMO Project, Reva and David Logan Center for the Arts, D Gallery, The Franklin, Hyde Park Art Center, and Walter Phillips Gallery, among others. She received her BFA from Syracuse University, an MFA from the University of Cincinnati, and has been an artist in residence at the Chicago Artist Coalition, Vermont Studio Center, 8550 Ohio, Banff Centre, Ox-Bow, and Spudnik Press Cooperative. Cahill is a member and the current Director in Chicago of Tiger Strikes Asteroid, an artist-run, non-profit, network of gallery spaces with locations in Chicago, New York, Los Angeles, Philadelphia, and Greenville. 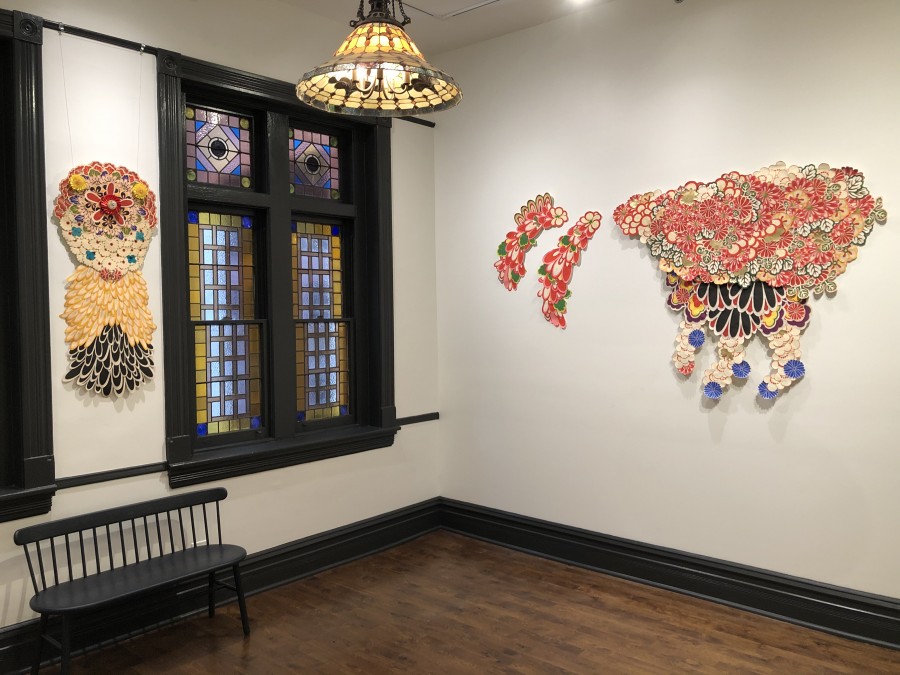