On view through Friday, January 8th

For social distancing purposes, we intend to use the front lawn of 3311 as a waiting area and invite groups of 2-4 people to enter the space at a time. There will be a bbq throughout the duration of the opening, please use our Google doc to sign up for a viewing time.

My first obsession with miniatures was a rubber dog food and water bowl the size of a thimble. In elementary school I pretended the object was a supercomputer, flipping the toy vertically to extract data about anything I had an interest in. I pretended to type on the imitation kibble like small keys, squinting my eyes at the fake water as if it was a screen. The object allowed me to explore complex processes at a small scale. It was my tracking device, encyclopedia, and text editor of secret notes, helping to translate all of my youthful theories into imagined facts. The simple toy became a signifier of my understanding of the world’s complexity, a tangible representation of the intriguing and vast unknown.

The palm-sized supercomputer that now rests in my pocket still symbolizes the unobtainable, force-feeding me information about relationships I previously experienced in person. In the past months I’ve fallen deeper into this saturated digital world, relying on the text and video-based simulacra of friends and colleagues as pixelated doses of socialization once had in conference rooms, crowded bars, and galleries. In the two-person exhibition Snafu, Shitshow, Clusterfuck, objects of traditional play—dolls and furniture— present scattered vignettes of intimate and nanscent interactions absent from present life. Busty dolls constructed from silicone, foam, and rubber by Isabelle Frances McGuire interact languidly or in fearsome passion on a centralized plinth, their scenes punctuated by paper model furniture by Tim Mann.

Outside of the exhibition, the scaled tables, benches, and chairs act as maquettes. Their micro-ergonomics are not called into question until juxtaposed with similarly scaled bodies. Then the works become sketches for places of social interaction, throwing the viewer into a distorted reality where one can imagine heated exchanges, wine spilled over their edges, or sweat pooling on the chairs.

Viewing the works as images allows the pieces to operate as therapeutic models, inviting visitors to work out their frustrations, violence, and confusion on the nearly room-sized plinth. McGuire’s sculptural dolls reference Baudrillard’s hyperreal by representing individuals without reference. The dolls are models of beings that never were, imaginative figures playing out the emotions, pent-up desires, or traumas of the audience. McGuire presents the often nude dolls as substitute subordinates, overly sexualized hyperreal seductions for their benefit.

Despite their role as human referents, there is something off about each form. A melted thigh, a missing foot, a chilling blank stare. The figures appear as if they’ve been rendered too abruptly, pulled from the simulation too soon. In the same jarring way, excerpted images are transposed on the side of Mann’s chairs. The sliced details are selections from music video and movie stills, previous exhibition shots, and New Deal era federal play posters which randomize your experience. Presented like a cross-over series, the figures begin to play into actions previously unseen, playing characters either suggested or subconsciously planted by the secretive inkjet elements.

The East Room becomes a backstage workshop, displaying miniature works by Mann and McGuire, this time flattened, splayed, restricted, and framed. The elemental ingredients of both bodies of work laid bare, the miniatures’ true nature is revealed. The patterns composing Mann’s miniature furniture are plainly presented, and a consumerist pleasure is exposed in McGuire’s objects of desire and detritus. The actors take a break, exposed in the green room behind the West Room’s stage.

A multi-part play written by Liz Vitlin based on select vignettes from the West Room will be released digitally during the run of the exhibition.

Tim Mann (b. 1990 Woodstock, IL) lives and works in Chicago where he received a BFA from the School of the Art Institute of Chicago in 2013. His recent work focuses on facilitating interactions and discussions between people. Employing object design and photography, sculptures take the form of functioning things like clocks, tables, benches, and shelves, centering the focus of viewers to the use of the object rather than the meaning of the image. In 2017 he co-founded Prairie, an artist-run exhibition space in Chicago that focuses on exhibiting critically engaged emerging artists from Chicago and abroad, where he is co-director. He is also the Managing Director at MICKEY, a commercial gallery in Chicago that focuses on exhibiting emerging and mid-career artists. In the fall of 2020 he will present a two person show with Isabelle Frances McGuire at Julius Caesar (Chicago) as well as curate a presentation of work by Ficus Interfaith for the exhibition Artist Run Chicago 2.0 at the Hyde Park Art Center (Chicago). Past exhibitions include Zakaib Projects (Chicago), Fri-Ends (Providence), Obst (Chicago), Alter Space (San Francisco), SPF15 (San Diego), Faber&Faber (Chicago), Lodos (Mexico City), and BAR4000 (Chicago).

Isabelle Frances McGuire (b. 1994 Austin, Texas) lives and works in Chicago, IL. McGuire received a BFA from School of the Art Institute of Chicago. Recent solo and duo exhibitions include P**** B**** Arena at Et. Al. curated by Good Weather (San Francisco), Digesting Duck Entry Level Position at From the Desk of Lucy Bull (Los Angeles), Just Models at Sibling (Toronto), Babies Born without Brains at Lagos (Mexico City), and I’m a Cliche at Prairie (Chicago). McGuire participated in group exhibitions at In Lieu (Los Angeles), Alyssa Davis Gallery (New York City), and Gallery 400 (Chicago). Recent residencies and awards include the Alternative Worksite 2018 Residency Program (Founded by Linda Burnham and supported by the Robert Overby Estate) (Roanoke), AIR Program at Latitude (Chicago) and a grant from the Foundation for Contemporary Arts. 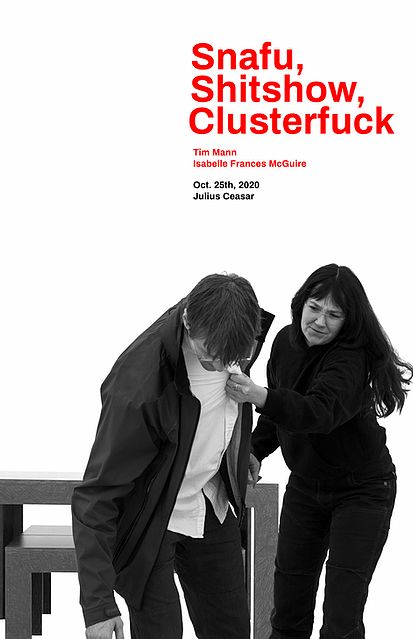