Looking at the rise of sports entertainment throughout the 20th century, RARA builds upon the particular forms of storytelling embedded within the game of football. Tumbling narratives of achievement, redemption, progress and the unknowns of improvisation, chance, and limitation. The mechanics of these athletic narratives have informed generations’ understanding of community, citizenship, and nationalism. Inspired by the cultural crockpot of stadiums, mascots, chips and dips fuse into a slurry of capitalistic machismo, McWharter delves into the aesthetics of audience allegiance, superstition, hope, and cultural value. Imagining a dystopian future where the economic basis of the American football has collapsed, what becomes of the cheerleader? The Cheerleader: hyper feminine, all – American, underpaid and oversimplified, overtly sexual and under sexed, she improvises her way through a revolving landscape of abandoned arenas. Propelled by the particular rhythms and tones of popular half time speeches captured in sports drama, RARA opens new access points to this conversation through performance, speculation, and a keen eye on the rhetoric of motivation. This work becomes a tool to synthesize how forms of competition, play and citizenship interlock. 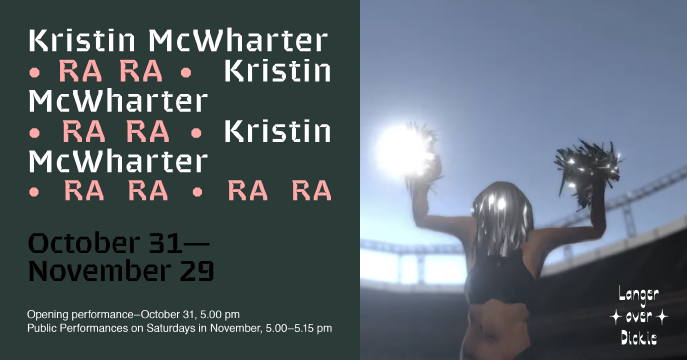