A WAR OF THE WORLDS

@ Theatre in the Dark

Theatre in the Dark’s second production will be an original audio drama adaptation of H.G. Wells’ THE WAR OF THE WORLDS, performed live online.

The new script, A WAR OF THE WORLDS, was written by company founders Corey Bradberry and Mack Gordon. While it follows the contours of Wells’ story of a Martian invasion, it moves the action to present-day Chicago. The audio drama will be performed live online from October 15 to November 21.

Bradberry says, “Before the COVID restrictions prohibiting large group gatherings, we had planned A WAR OF THE WORLDS to be performed in a completely dark theatre space. Fortunately, our company aesthetic of audio-only drama lent itself to the medium of Zoom-enabled performance and we began to plan for an online presentation, with actors and Foley artists performing from their home studios. A WAR OF THE WORLDS will be a virtual audio drama for audiences to enjoy in their own home as people did in the golden age of radio. Relax and settle into a dark space with wine and food before submitting to the horrifying thought of an invasion from another planet.”

Tags: A WAR OF THE WORLDS, Chicago, Corey Bradberry, Mack Gordon, Theatre in the Dark 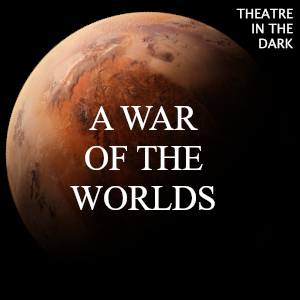