his screening will be streamed here https://mcachicago.org/Calendar/2020/09/Screening-Sci-Fi-Sessions

Explore ideas of the “other” and the alien in this screening of short films by Neil Beloufa, Meriem Bennani, and Bertrand Dezoteux. This event is the first of two screening sessions that accompany the exhibition Alien vs. Citizen. The artists in this grouping play with different meanings of the word “alien,” which relates to one’s legal status in the US, but also brings to mind images of extraterrestrial creatures.

Drawing from the evocative imagery of sci-fi, Neil Beloufa, Meriem Bennani, and Bertrand Dezoteux each set their works in futuristic times and territories, in which the characters are either extraterrestrials or “posthumans,” whose bodies, minds, and speech diverge from terrestrial norms. Each film plays with the double meaning of the word “alien:” they appropriate elements from science-fiction cinema to reflect on immigration, diasporic communities, and representation as seen through the colonial gaze.

The screening will be followed by a pre-recorded conversation with artist Meriem Bennani and Line Ajan, MCA Barjeel Global Fellow. MCA Screenings feature works of contemporary cinema that expand traditional notions of moviegoing.

This presentation is organized by Line Ajan, Barjeel Global Fellow, with the Performance and Public Practice team.

Neil Beloufa’s Kempinski (2007), which he calls a “sci-fi ethnographic documentary”, unfolds as a set of interviews with young Malians. Using the present tense, they tell us how they imagine their life in the future. Their answers humorously hint at cultural stereotypes that Westerners often project on inhabitants of the African continent, namely in ethnographic documentaries. The characters’ previsions span a wide range of possibilities, from mating with cattle to worshipping them, but also include virtual lovemaking and telepathy.

Bertrand Dezoteux’s Harmonie (2018) tells the tale of Jésus Perez, a Frenchman exploring a planet inhabited by otherworldly “intelligent” creatures. These aliens can only speak two words: “oui” and “non”, French for “yes” and “no.” Amazed by their knowledge of the French language—one the most effective tools used to assert French hegemony in colonial times, he asks them various questions to understand their world. Using humor and references to B movies, Harmonie turns the human into the invader, and the alien into the invaded—an inversion of roles that may be read as a critique of colonial histories.

In Meriem Bennani’s Party on the CAPS (2018), teleportation has “replaced airplanes” as announced by the work’s narrator Fiona, a 3D animated crocodile who is the mascot of the CAPS, short for capsule and the name of the fictional island in the Atlantic Ocean where the film is set. But instead of facilitating freedom of movement, teleportation enables the policing of immigrants wishing to enter the US. In this dystopia, Moroccans are intercepted mid-teleportation and trapped on the CAPS, a process which alters the bodies and habits of this diasporic community. 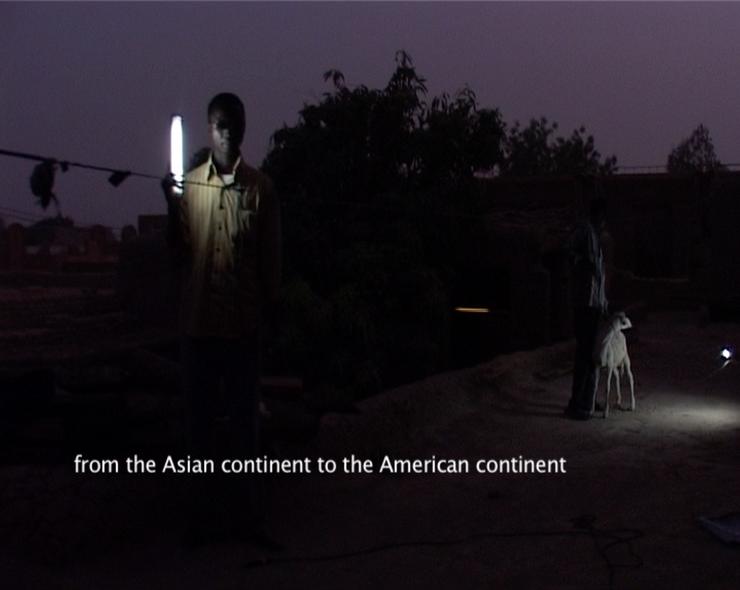