Richard Hunt: Scholar’s Rock or Stone of Hope or Love of Bronze

On view through Thursday, July 1st

Developed intuitively, his works emerge from a shape visualized in his mind, cut into metal, and welded together in a process that can continue for many years. Inspired by the medium itself, he often reuses scraps and found metal and responds to the needs of the material in what he refers to as “an ongoing process of things getting built and grown.”

This exhibition draws its title, Scholar’s Rock or Stone of Hope or Love of Bronze, from a monumental bronze sculpture that exemplifies Hunt’s recent practice. Over the last six years, he has engaged in a durational approach of continually adding, removing, and reshaping the work, investigating the meaning of bronze both in relation to its mythological and material attributes, as well as its inherent transformative possibilities. This massive bronze is complemented by two other large-scale stainless steel sculptures, as well as a selection of smaller-scaled bronzes, all of which were completed in the last 20 years. Together, they represent the range of the artist’s engagement with metal, spatial occupation, and the notion of the base, as well as the ways in which objects are in dialogue with bodies and the built environment. In the installation on the museum’s Bluhm Family Terrace, the scale of the sculptures coalesces with the Chicago skyline.

In many ways, this exhibition is a homecoming for Hunt. Raised in Chicago, he graduated from the School of the Art Institute in 1957, and in 1958 his work Hero Construction was acquired by the museum. Today that work is prominently displayed on the Woman’s Board Grand Staircase. Over 150 of Hunt’s public sculptures can be found throughout the United States and abroad, but his studio practice remains firmly grounded in Chicago. Working out of a repurposed Chicago Railway Systems electrical substation built in 1909, he has space to be able to continuously create both towering sculptures and more intimate constructions.

This exhibition—a celebration of one of Chicago’s most legendary artists and one of the most important sculptors of our time—is the first dedicated to Hunt’s work at the Art Institute of Chicago since the 1971 The Sculpture of Richard Hunt. 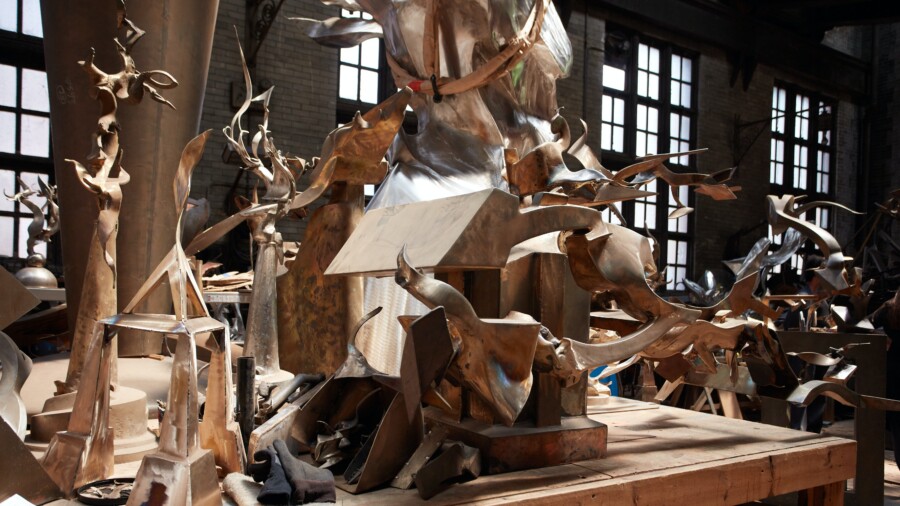