John Hébert, bassist, was born in New Orleans, Louisiana where he first began to study double bass with Bill Huntington. John attended Loyola University of New Orleans where he received a full scholarship. After two years of performing with many of New Orleans greatest musicians and performing at various clubs including the New Orleans Jazz and Heritage Festival he moved to the New York tri-state area to attend William Paterson University where he continued his studies under bassist, Rufus Reid and received a Bachelor of Music in Jazz Performance.
Since graduating in 1995, John has lived in the New York City area and established himself as a highly sought after bassist. He has worked alongside world-famous artists such as Andrew Hill, Lee Konitz, Paul Bley, John Abercrombie, Kenny Wheeler, Paul Motian, Joe Maneri, Mary Halvorson, Tomasz Stanko, David Liebman, Uri Caine, Greg Osby, Bill Stewart, Marc Copland, Fred Hersch, Toots Thielemans, Maria Schneider, and many others.

In recent years, he has taken on the role of bandleader of various projects. His group Byzantine Monkey, released their first CD in June 2009 on the Firehouse 12 label. It was reviewed in Downbeat and received 4 stars. “On his first album as a leader he displays a sonic vision that’s all his own,” says Peter Margarsak. In 2010, John Hébert Trio released Spiritual Lover on the Clean Feed label to very positive reviews. According to Stuart Broomer, “it’s a trio of genuinely equal parts and plays music of great melodic strength.” In 2011, John formed his Rambling Confessions quartet which has performed at well-known clubs such as The Stone and Jazz Gallery.

He is also named in Downbeat’s 2006, 2007, 2008, 2009 and 2010 Critics Poll as a “Rising Star Acoustic Bassist.” Most recently in 2011, John won the poll as “Rising Star Acoustic Bassist.” From 2001 until Andrew Hill’s passing in 2007, John worked with Mr. Hill in various ensembles. John is also featured on Andrew Hill’s last Blue Note release, “Time Lines” which was awarded “Record of the Year” by Downbeat’s Jazz Critics Poll in 2006. John has also performed around the world at festivals such as the North Sea Jazz Festival, Tampere Jazz Festival, Montreal Jazz Festival, Moers Jazz Festival, Ear Shot Jazz Festival and San Francisco Jazz Festival. He can also be heard in some of New York City’s most renowned venues such as The Village Vanguard, Blue Note, The Jazz Standard, Birdland, and Iridium.

In 2011 John was awarded the French American Jazz Exchange Grant from the French Cultural Institute and Mid-Atlantic Arts Foundation for his work with Parisian pianist Benoit Delbecq and New York drummer Gerald Cleaver. The follow up to the trio’s first recording was released in January of 2014. The album entitled Floodstage on Clean Feed records has already gained much attention since its release.
2015 saw the latest release by John on the Sunnyside record label entitled “Rambling Confessions”. It features vocalist Jen Shyu, pianist Andy Milne, and drummer Billy Drummond. The record has received much praise including 4.5 stars in Downbeat.
Quote

“I’ve been a huge fan of John Hébert’s work since hearing him perform with the late great Andrew Hill in Paris back in the early 2000’s. A truly great musician who shines in any musical situatuion, Mr. Hebert’s list of collaborators and discography is as multifaceted as his approach to sound making. I’m very much looking forward to his solo performance and to our discussion.” -Tim Daisy/ Option Programmer 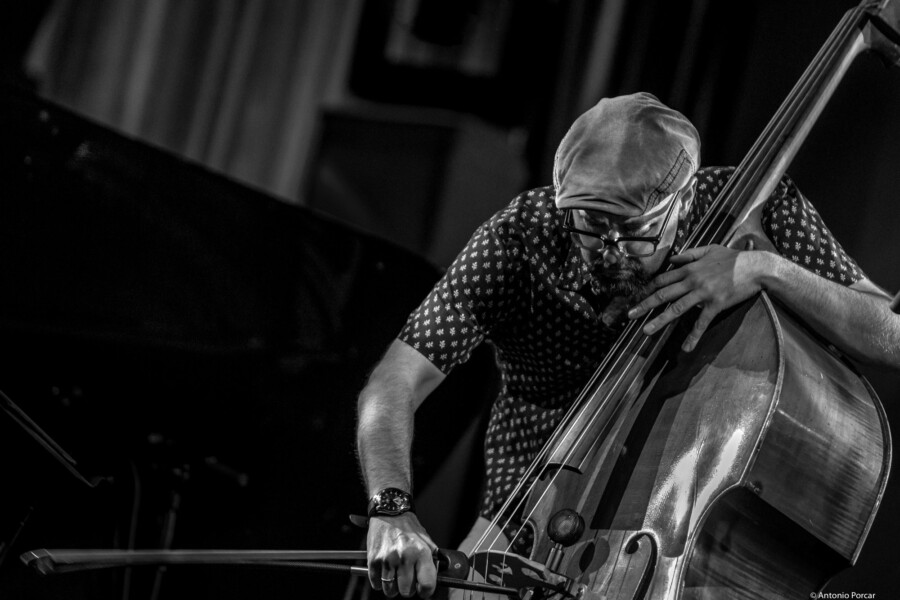