On view through Saturday, December 26th

In consideration of ongoing COVID-19 restrictions, viewing of our fall exhibitions will be limited. Groups of up to four people may book private viewing appointments between the hours of 11 am and 5 pm, Tuesday through Friday, and between 12 and 4 pm, Saturday. All visitors to Kavi Gupta will be required to wear masks at all times and to maintain social distancing of at least six feet. Temperatures will be taken at the door.

Kavi Gupta proudly presents Deborah Kass: Painting and Sculpture, the gallery’s inaugural solo exhibition with the artist. Pairing a stunning new body of work with select historical pieces, the exhibition creates an unflinching examination of the American condition before and during the Trump presidency.

The canonized giants of Pop Art and Minimalism defined themselves by their opposition to each other: Pop Art could be anything; Minimalism was everything Pop Art wasn’t. However, as a young artist, Deborah Kass saw things differently. Pop and Minimalism were both equally radical. Her dual admiration, along with her commitment to examining the political climate of today, expresses itself abundantly in this show.

Just a Shot Away (2015) references the Rolling Stones song “Gimme Shelter,” in which back-ground singers mournfully repeat, “Rape, murder.” Kass made the piece during the first wave of Black Lives Matters protests. Its color palette—black and blue—simultaneously references police violence against people of color, and Ellsworth Kelly’s black and blue Minimalist works. We might also read something hopeful in these words, as a return to public life is theoretically just a (vaccination) shot away.

Kass first sketched DON’T STOP (2020) immediately after watching the finale of The Sopranos. Tony picks Journey’s “Don’t Stop Believin’” on the jukebox as a possible assassin in a Members Only jacket walks out of the bathroom towards him, à la Michael Corleone in The Godfather. Kass knows, of course, the words are also in Michael Jackson’s “Don’t Stop ’Til You Get Enough” and countless other pop songs. Yet, it wasn’t until the Trump era that she actually felt compelled to make these enlarged, neon versions of the piece. The phrase was something of a mantra to herself, about not giving up DESPITE the overwhelming tragedy that is the Trump presidency.

Kass’s nine-panel EVERYBODY (2019) was in-spired by the Martha Wash/Black Box club jam, “Everybody Everybody,” while its color palette suggests Ellsworth Kelly’s installation in the lobby of the National Gallery in Washington, DC. Her multi-panel EMERGENCY series (2019–20), meanwhile, references everything from Kazimir Malevich to Jasper Johns to the Bauhaus. Is Kass telling us to open up the art historical canon to everybody? Is the need for equity and equality in society at emergency levels? These works, which were started before the onset of COVID-19, are incredibly prescient expressions of the ethos of our time: that EVERYBODY is in this EMERGENCY together.

The seven-panel Day After Day (2010) was made during the Obama administration, when oil from a damaged BP rig was gushing into the Gulf of Mexico, day after day. The lyric is from Stephen Sondheim’s “Not a Day Goes By,” from the musical Merrily We Roll Along. In this moment, it seems also to speak to inescapable waiting.

Kass’s iconic OY/YO sculpture sits in anti-patriarchal protest with her painting “Daddy, I Would Love to Dance” (lyrics from “At the Ballet”), which Kass describes as the first emotional epiphany for the women in the musical A Chorus Line, and her neon sculpture After Louise Bourgeois (2010), which features an altered quote from the legendary artist: “A woman has no place in the art world unless she proves over and over again she won’t be eliminated.”

“The resonance with this work is that so many can identify with it,” Kass explains. “Identity is a noun. It is WHAT you are. It’s how you come out of your mother. But when you identify with some-thing outside of yourself, it’s active. It’s a verb. That’s how you start constructing WHO you are as a subject, a person—internally, emotionally, spiritually—and imagining how you can be in the world. Now people say, ‘If you can see it you can be it.’ This is the very meaning of inspiration.”

Deborah Kass (born 1952) is an American artist whose work explores the intersection of pop culture, art history, and the construction of self. Work by Kass is in the collections of The Metropolitan Museum of Art, The Museum of Modern Art, The Whitney Museum of Art, The Solomon Guggenheim Museum, The Jewish Museum, The Museum of Fine Art, Boston, The Cincinnati Museum, The New Orleans Museum, The National Portrait Gallery, Smithsonian Institute, Fogg/Harvard Museum, as well as other museums and private collections. Kass’s work has been shown nationally and internationally including at the Venice Biennale, the Istanbul Biennale, and the Museum Ludwig, Cologne. The Andy Warhol Museum presented “Deborah Kass, Before and Happily Ever After, Mid- Career Retrospective” in 2012, with a catalogue published by Rizzoli. In 2018, Kass was inducted into The National Academy. In 2014, she was inducted into the New York Foundation for the Arts Hall of Fame. She was honored with the Passionate Artist Award by the Neuberger Museum in 2016, and was the Cultural Honoree at the Jewish Museum in 2017. She serves on the boards of the Sharpe Walentas Studio Program and the Andy Warhol Foundation for the Visual Arts. 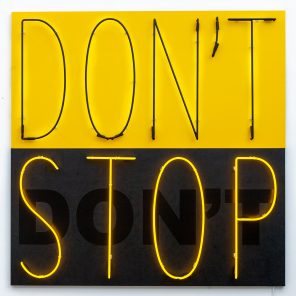