Join us for a virtual event with award-winning author Nnedi Okorafor to celebrate the release of her new novel, IKENGA.

Attendees must REGISTER THROUGH EVENTBRITE to receive the access link to this event.

Nnedi will be joined by a special guest who will be announced shortly!

Nnamdi’s father was a good chief of police, perhaps the best Kalaria had ever had. He was determined to root out the criminals that had invaded the town. But then he was murdered, and most people believed the Chief of Chiefs, most powerful of the criminals, was responsible. Nnamdi has vowed to avenge his father, but he wonders what a twelve-year-old boy can do. Until a mysterious nighttime meeting, the gift of a magical object that enables super powers, and a charge to use those powers for good changes his life forever. How can he fulfill his mission? How will he learn to control his newfound powers? Award-winning Nnedi Okorafor, acclaimed for her Akata novels, introduces a new and engaging hero in her first novel for middle grade readers set against a richly textured background of contemporary Nigeria.

Nnedi Okorafor is the daughter of Nigerian-born (Igbo) parents. She grew up in the Chicago area, with frequent trips back to Nigeria. There she absorbed the history and mythology that infuse her works of science fiction and fantasy. She has received the Hugo, the Nebula, the World Fantasy Award, and the Locus Award for her work, and her fans include Neil Gaiman, Rick Riordan, John Green, and Ursula Le Guin. Ms. Okorafor holds a PhD in English. She lives with her daughter in the suburbs of Chicago.

Praise for IKENGA:
“This wonderfully fresh superhero origin story offers a look into the shadowy, inexplicable powers that are suddenly in the hands of an ordinary child…Okorafor has created unique, multifaceted characters that will have young readers hoping for Nnamdi’s next adventure.” – School Library Journal, STARRED REVIEW

“Fans of classic superheroes—including Nnamdi’s favorite, the Incredible Hulk—and readers looking for a young superhero will find a champion in Nnamdi.” – Publishers Weekly

“A memorable middle-grade murder mystery that’s darkly humorous in some places and delightfully creepy in others.” – Kirkus Reviews
“A tightly paced action-adventure.” – Booklist 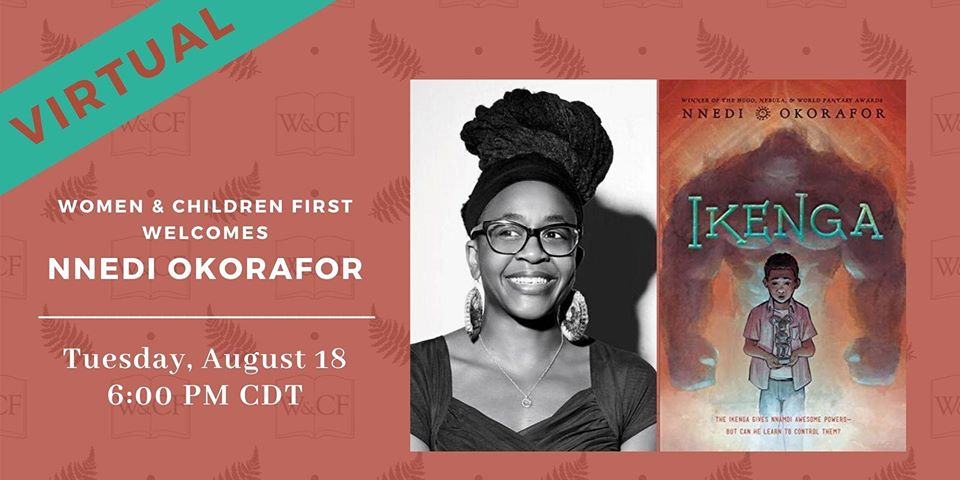