On view through Sunday, September 20th

The Evanston Art Center is pleased to invite the public to the opening of “Mark Nelson: Humanity Amorphic.”

The artist will be present during the event.

A limited number of visitors will be allowed in the gallery space at the same time.

The safety of gallery staff and visitors is essential. ALL visitors are required to wear masks and take their temperature upon entry using provided gloves, and share results with an EAC staff member. Please adhere to 6′ social distancing requirements when in the gallery space.

Learn more about the exhibition: https://www.evanstonartcenter.org/exhibitions/mark-nelson-humanity-amorphic

Mark Nelson’s work was forged by his childhood experiences overseas. Raised as a Colonial American outside of the continental U.S., his international travels culminated in a near twenty-year residence within the Republic of Panama where he developed an interest in visual and performing arts. Nelson returned to the USA to finish his formal education in the 1980’s at the School of the Art Institute of Chicago, followed by an MFA at the University of Illinois in Chicago. Nelson’s work can be found in private and public collections that includes a canvas mural in the US Embassy collection in the Republic of Panama. Nelson has also participated in several public projects such as the Cows on Parade and Lighthouses on the Mag Mile. Mark Nelson has been a resident of Chicago’s Pilsen neighborhood artist community at his Gringolandia Studio for 22 years where the public may visit annually during the 18th Street Pilsen Open Studios.

If you asked a young child what they thought human traffic was they might tell you it’s being stuck in a crowded room with too many tall legs around you or an adolescent might tell you it means pedestrians, and to many adults it might symbolize the migration of people or on a local scale represent the motion of commuters or festive attendees. What they are less likely to connect with is the flow of hidden and illicit human trafficking that they may not be aware of.

Our government defines trafficking involving the “use of force, fraud, or coercion to obtain some type of labor or commercial sex act and is modern-day slavery,” and this also includes forced marriage and human organ extraction. Remember when your parents told you to not talk to strangers? This was the first lesson in being safe from abduction or harm. Although many indigenous Americans were the first to be enslaved in the 1500’s, human slavery can be traced back to ancient times as spoils of war, power and greed. In America, we usually think of the industrialization of slavery regarding the African Diaspora where millions experienced trauma and genocide. Even in modern times, human trafficking still exists as international business. According to the Center for Global Impact, there are four main areas that people fall prey to traffickers; “Leaving a place of poverty to gain wealth, political conditions, war, and social and cultural practices.” This is like a perfect storm such as what is being discussed on the news with the country of Libya where Africans are being sold The United Nations addresses the root causes and believes the following areas are where we can combat human trafficking,

These paintings I created were initially an attempt to have a dialogue about immigration on our southern border where thousands of asylum seekers experienced confinement and human trafficking conducted by our own government as immigrants were shuffled around and confined like prisoners and their children separated from them to seemingly disappear. The more I worked on these paintings, the more I began associating the plight of Central America with that of Native America, Black America and all Americans who have had their rights and dignity challenged over the color of their skin or the accent of their voice. 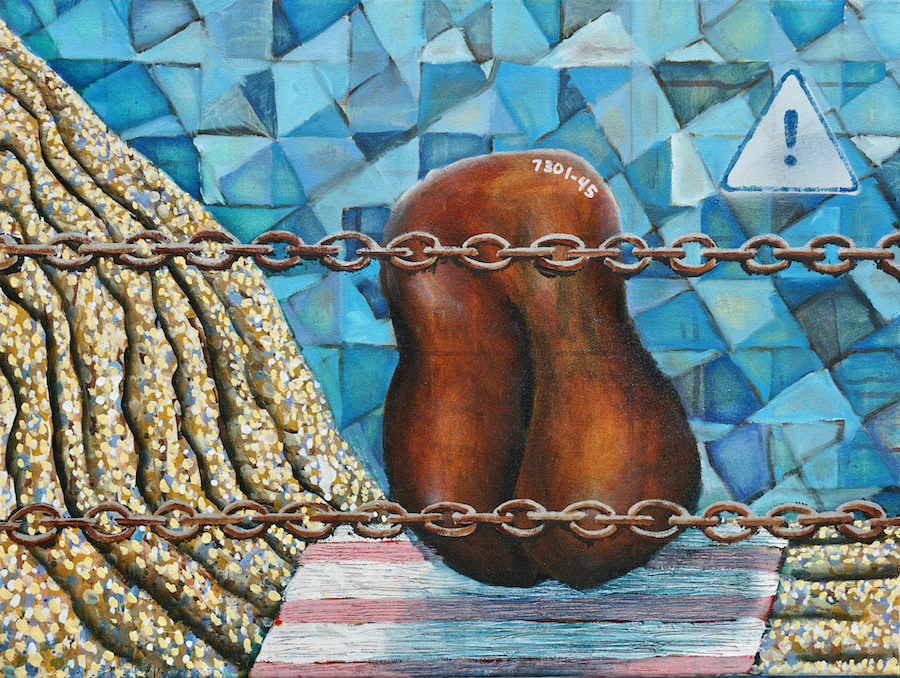