Hibakusha: A tribute to the 75 anniversary of the atomic bombing

On view through Friday, September 4th

Michael Koerner
“Hibakusha: A tribute to the 75th anniversary of the atomic bombings”

Catherine Edelman Gallery is excited to open its doors with Michael Koerner: “Hibakusha: A tribute to the 75th anniversary of the atomic bombings.” The show opens July 10 and runs through September 4, 2020. To avoid crowds, the opening reception will be from noon – 7:00 pm on Friday, July 10.

On August 6, 1945, the United States dropped an atomic bomb on Hiroshima, and another one three days later on Nagasaki, killing tens of thousands instantly, and more than 200,000 people in total. Michael Koerner was born in Okinawa, Japan in 1963, the son of a Japanese mother and American military father. For the past few years, Koerner has been making one-of-a-kind tintypes about his family and the effects of gamma radiation that has taken the lives of all members of his immediate family. In honor of the anniversary of the bombing, Koerner created Hibakusha, a photographic series that pays respect to those that passed away and those that survived. Hibakusha is a Japanese word that refers to people affected by the nuclear bombings. As Koerner states:

“I wanted to bring attention to those that survived the blast, including my mother, who unfortunately later succumbed to the effects of radiation released on the Japanese people. I decided to make large tintypes that look like families, or people. All the plates are purposely void of color, except silver, which is intrinsic to the tintype process. By eliminating the blue and green hues that are prominent in my recent work, the images take on a haunting glow, reminiscent of the light that appeared in the skies over Hiroshima and Nagasaki. I hope viewers will look at these images and reflect on what happened so many years ago and honor those that survived and perished from this nuclear disaster.”

Michael Koerner’s exhibition will be in our lower level video room, creating an intimate environment for the viewer. Please go the info section on our website for accessibility details. Only one person at a time will be allowed in the room, due to physical distancing standards. 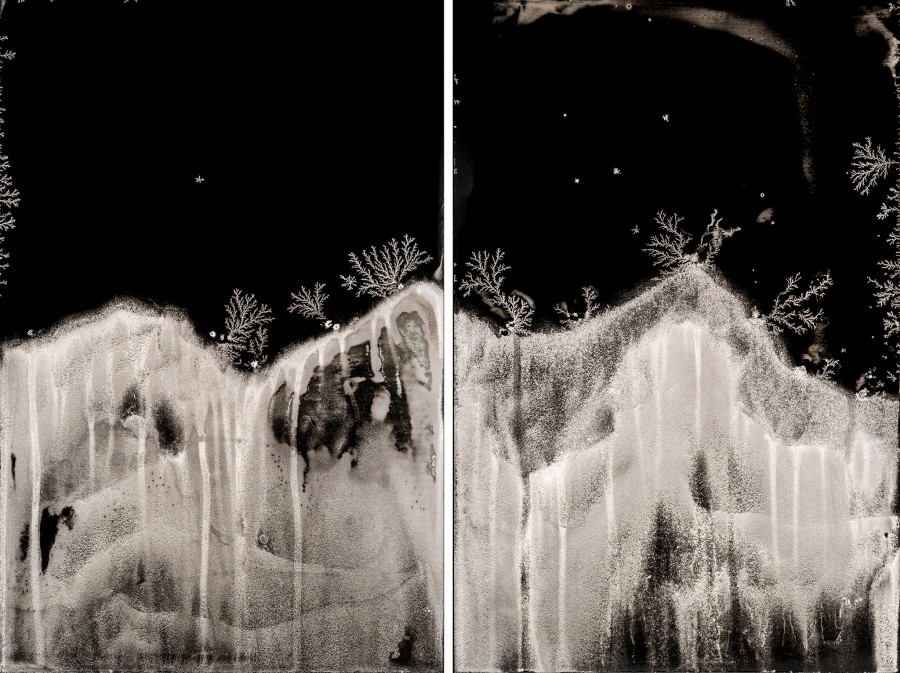