Rekia's Tree at 15th and Albany

We’re excited to announce the expansion of our Douglas Park “Change the Name” campaign! Please join us for the official relaunch at Rekia’s Tree in Douglas Park (15th & Albany) on Saturday, July 18, from 2-5pm.

The relaunch will be a celebratory gathering centering community and youth demands to:

(1) Remove the name of Stephen Douglas from the park.
(2) Uplift the lives and legacies of abolitionists and freedom fighters Frederick Douglass & Anna Murray-Douglass by renaming the park in their honor.

The students of Village Leadership Academy began this renaming campaign over three years ago with the support of 24th Ward Alderman Michael Scott, Jr.; however, both he and the Chicago Park District Board of Commissioners have been largely unresponsive, ignoring students’ official petitions and proposals over the years.

The “Change the Name” campaign has now grown into a larger community collaborative effort with the following short-term and long-term goals and demands:

– Removal of Stephen Douglas Tomb and Memorial from Bronzeville;
– Removal of ALL public statues, portraits, landmarks, monuments, and symbols of white supremacy in Chicago.

Together, we believe that we can (and will) win.

If you’ll be joining us next Saturday, July 18, please be sure to WEAR A MASK and follow all recommended COVID-19 health and safety protocols, including mindful social distancing.

If you’re not able to join us, you can still support the short-term and long-term goals by donating to and/or sharing the Douglas Park Change the Name GoFundMe campaign:
https://gf.me/u/ydzfbi 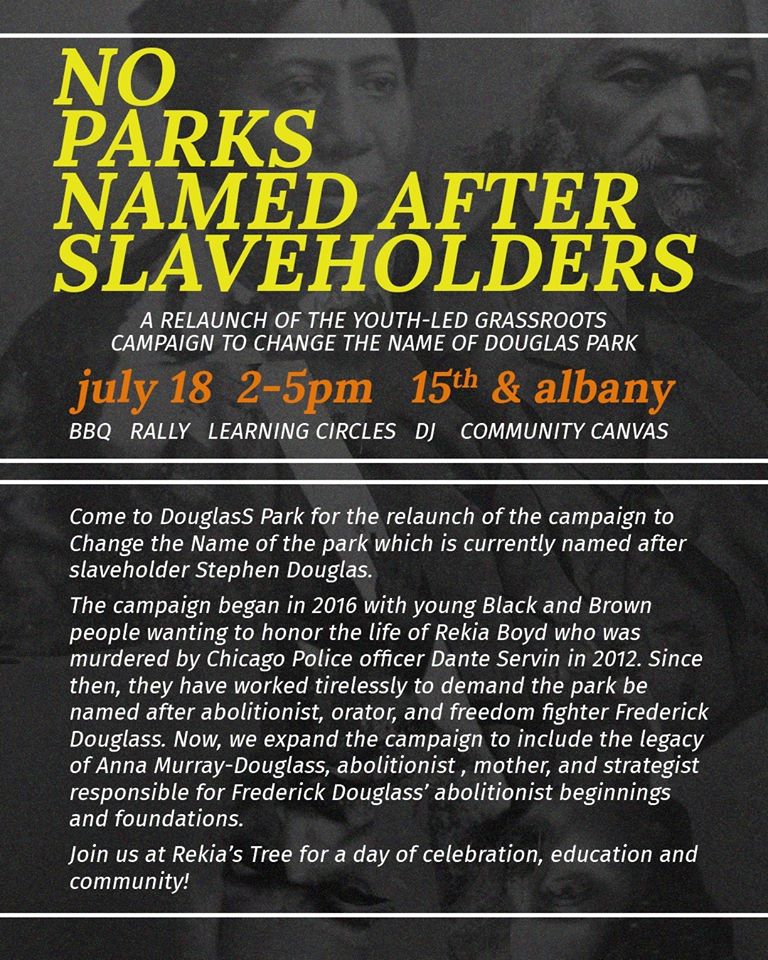