Begin Again: James Baldwin’s America and its Urgent Lessons for Our Own

Eddie Glaude and Cornel West discuss the enduring legacy of James Baldwin and lessons from his work for confronting racism today.

“In the midst of an ugly Trump regime and a beautiful Baldwin revival, Eddie Glaude has plunged to the profound depths and sublime heights of Baldwin’s prophetic challenge to our present-day crisis.” —Cornel West

James Baldwin grew disillusioned by the failure of the civil rights movement to force America to confront its lies about race. In our own moment, when that confrontation feels more urgently needed than ever, what can we learn from his struggle?

We live, according to Eddie S. Glaude Jr., in a moment when the struggles of Black Lives Matter and the attempt to achieve a new America have been challenged by the election of Donald Trump, a president whose victory represents yet another failure of America to face the lies it tells itself about race. From Charlottesville to the policies of child separation at the border, his administration turned its back on the promise of Obama’s presidency and refused to embrace a vision of the country shorn of the insidious belief that white people matter more than others.

We have been here before: for James Baldwin, these after times came in the wake of the civil rights movement, when a similar attempt to compel a national confrontation with the truth was answered with the murders of Medgar Evers, Malcolm X, and Martin Luther King, Jr. In these years, spanning from the publication of The Fire Next Time in 1963 to that of No Name in the Street in 1972, Baldwin transformed into a more overtly political writer, a change that came at great professional and personal cost. But from that journey, Baldwin emerged with a sense of renewed purpose about the necessity of pushing forward in the face of disillusionment and despair.

In the story of Baldwin’s crucible, Glaude suggests, we can find hope and guidance through our own after times, this Trumpian era of shattered promises and white retrenchment. Mixing biography—drawn partially from newly uncovered interviews—with history, memoir, and trenchant analysis of our current moment, Begin Again is Glaude’s endeavor, following Baldwin, to bear witness to the difficult truth of race in America today. It is at once a searing exploration that lays bare the tangled web of race, trauma, and memory, and a powerful interrogation of what we all must ask of ourselves in order to call forth a new America.

Eddie S. Glaude Jr. is a scholar who speaks to the black and blue in America. His most well-known books, Democracy in Black: How Race Still Enslaves the American Soul, and In a Shade of Blue: Pragmatism and the Politics of Black America, take a wide look at black communities and reveal complexities, vulnerabilities, and opportunities for hope. He is the William S. Tod Professor of Religion and African American Studies and chair of the Department of African American Studies at Princeton University.

Cornel R. West is Professor of the Practice of Public Philosophy at Harvard Divinity School. He is best known for his classics Race Matters and Democracy Matters, and his memoir, Brother West: Living and Loving Out Loud. He is the host with Tricia Rose of a new podcast, The Tight Rope.

Preorder a copy of Eddie Glaude Jr.’s new book, Begin Again: James Baldwin’s American and Its Urgent Lessons for Our Own, coming out June 30th. 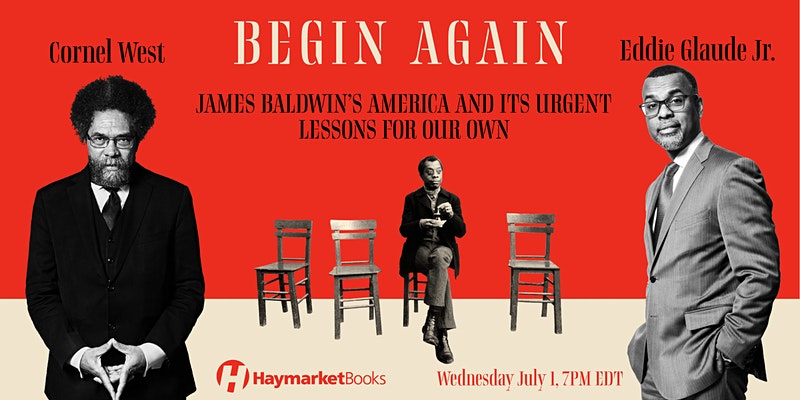