Join The Block for a special live streaming event of Badnam Basti (1971), one of the first Indian films to explore queer relationships.

Join the Block Museum of Art, Northwestern University for a special livestream broadcast of Prem Kapoor’s Badnam Basti (Alley of Ill Repute) followed by an online discussion with Simran Bhalla (PhD candidate in Screen Cultures and interdisciplinary graduate fellow at the Block Museum of Art for 2019-2020) and Sudhir Mahadevan (Associate Professor of Cinema and Media Studies at the University of Washington, Seattle). The conversation will be moderated by Michael Metzger (Pick-Laudati Curator of Media Arts)

Badnam Basti is considered one of the first Indian films to explore queer relationships. Based on a novel by Hindi writer Kamleshwar Prasad Saxena, it centers on a love triangle between two men and one woman on the margins of society. The film is noted for its adventurous editing, strong performances, neorealist style, and the music by Vijay Raghav Rao, one of postcolonial India’s most innovative composers. Although Badnam Basti was recut and rereleased in 1978, it has since faded into obscurity; until recently, the film was presumed lost.

Presenting a new digital transfer from the only known 35mm print, this event may mark the first time this film has been screened for US audiences.

Part of the Block Cinema series:

India is home to the world’s most prolific and diverse film industries, and Bollywood movies in particular have found rapturous audiences from Russia to the Middle East. This series, presented as a complement to Modernisms: Iranian, Turkish and Indian Highlights from NYU’s Abby Grey Collection, features seminal classics of Indian cinema that have rarely been projected in the United States. In addition to landmark films by Guru Dutt, Ritwik Ghatak, and Mrinal Sen which consider postcolonial conflicts between tradition and modernity, the series also featured a program dedicated to the Shabistan Film Archive.

Co-presented by Block Cinema with support from theConsulate General of India, Chicago. 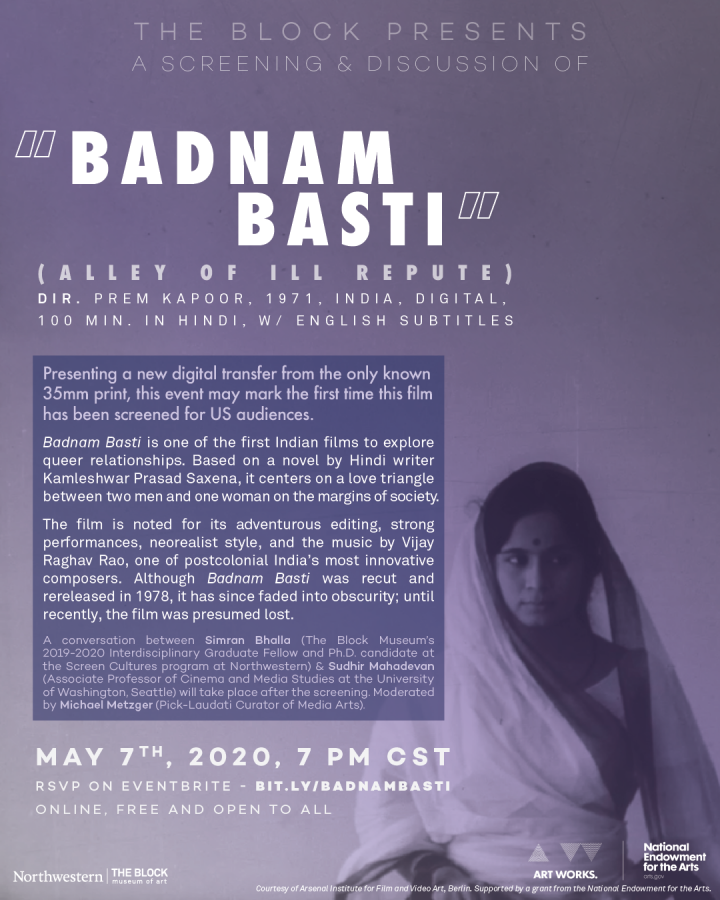