On view through Wednesday, April 15th

On Wednesday, April 15 at 7 p.m., ART on theMART will host a Facebook livestream of its inaugural digital projection program, which was originally projected onto the façade of theMART on September 29, 2018. The 40-minute program features four pieces by artists Diana Thater, Zheng Chongbin, Jason Salavon and Jan Tichy and can be enjoyed from the safety of one’s home at Art on theMART’s Facebook page.

Art on theMART will livestream additional programs from its archives on alternating Wednesdays, with the next live-stream scheduled for April 29. Specific pieces to be screened will be announced at a future date.

Art on theMART selected and commissioned the work by Thater and Zheng, while Salavon and Tichy were commissioned by the Terra Foundation for American Art. The works were designed to illuminate and transform the 2.5 acres riverside façade of theMART into the largest digital art projection in the world. In partnership with the City of Chicago, Art on theMART is completely dedicated to digital art with no branding, sponsorship credits or messaging and is privately funded by Vornado Realty Trust, the parent company of theMART.

Please note that the works will not actualy be projected onto the façade of theMART; the works can be viewed only through Facebook. Following the live-stream, the program will be available for viewing at artonthemart.com. 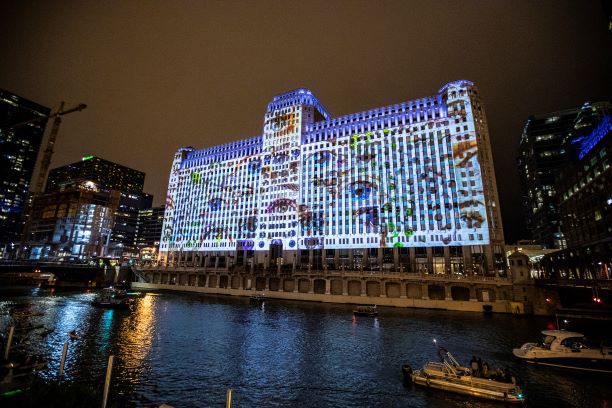