South Asia Institute (SAI) will host its inaugural gala on the evening of Saturday, March 14th, 2020. The gala will feature singer Zeshan B who will perform and debut his newest single “Brown Power”. The gala will also highlight SAI’s current exhibition “South Asian Modern Masters” curated by South Asia Institute’s Art Director, Dr. Marcella Nesom Sirhandi, Ph.D. The exhibition highlights the modernists and mid 20th century artists of India, Pakistan, Bangladesh, Sri Lanka and Nepal with many of their iconic works on display.

Tickets for the gala are currently on sale and may be purchased from www.saichicago.org. Tickets are $125 each and include dinner. Proceeds from ticket sales will support programming and exhibitions at SAI.

About South Asia Institute
South Asia Institute is a unique new cultural institution dedicated to South Asian art and culture, located in the historic Motor Row District of Chicago on South Michigan Avenue in a newly renovated three- story landmark building. SAI’s mission is to foster and promote all art forms, including, visual art, music, dance, film, and literature of the South Asian region through exhibitions, discussions, seminars and live
performances. South Asia Institute endeavors to establish a platform for experimentation in visual, cultural and literary
experiences. SAI is committed to cooperating locally and globally in the pursuit of producing, experiencing and understanding art in its various forms. The South Asia Institute supports and facilitates emerging artists through outreach, grants, cultural exchange and artist residencies.

About Zeshan B
Virtuoso vocalist Zeshan B is widely recognized as one of the most unique singers to come out of Chicago. Blending the hard-driving rhythms and horn heavy sounds of 60s and 70s soul with the angsty scats and vocal stylings of early Indo-Pakistani film/folk music, he has created an entirely new genre that is his very own. His breakout album “Vetted” was released in April 2017 to commercial and critical acclaim with the album debuting at #8 on Billboard’s Top 10 Albums (World Music) and peaking at #1 on iTunes’ World Music chart. In August of 2017, he made his US television debut with a stirring rendition of his hit single, “Crying in the Streets” on CBS’s Late Night w/ Stephen Colbert. Zeshan has just released his newest single “Brown Power” and will be releasing his latest album “Melismatic” in April 2020. 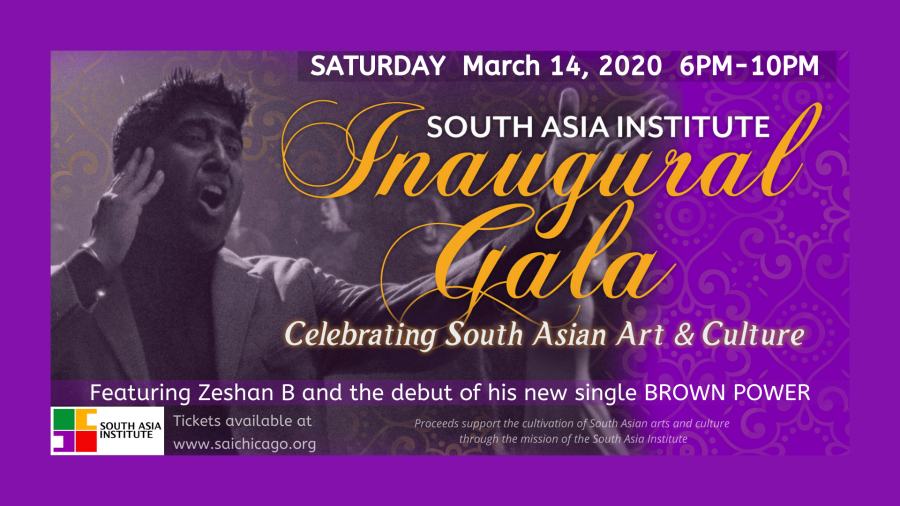