CJ Pyle: Crawling from the Wreckage

On view through Saturday, April 25th

“Crawling From The Wreckage,” like most of CJ Pyle’s exhibitions, is like a snapshot of the current state of his making process. Pyle’s solo exhibitions don’t necessarily contain a certain body of work, or act as bookends to a particular set of ideas or conceptual stimuli. The artist explains that his intuition guides the progression from piece to piece, as it does his compositions, his mark-making, his choice of colors. In a way, his entire oeuvre is a career-long continuation of a single practice: his laborious style of “knotted” mark-making with ballpoint pen upon found paper material. Pyle’s adoption of ballpoint pen in his drawing began decades ago, when he was a touring musician and free pens were the medium readily at hand. Over the years, Pyle has studied, researched and mastered the practice of drawing with a ballpoint pen, the intricacies of which are made so compelling throughout the works in “Crawling From The Wreckage.” In a single work like Goldie #6, Pyle uses a pen to render vastly differing textures, from smooth “ropes” to soft “wool” to the simple lines of the subject’s stubbly collarbone. Wah-Wah too features this array of mark-making; and, with the addition of a field of matte India ink in the background, the viewer can suddenly decipher a range of purpley-blue hues within the sheen of the “black” ballpoint ink.

The LP sleeves, the backs of which are so often the surface Pyle draws upon, are another holdover from his music career. Compared to the glossy print of the album covers, the versos are a kind of blank canvas, though in Pyle’s hands, even this plain paper board incites his aesthetic decisions. For the artist, the matte, lightly sealed surface is ideal for retaining the strokes of the pen; the square format and the head and shoulders of his subjects are in perfect harmony. In The Nice, Pyle makes use of an album cover entirely unfolded, its center crease a crucial component of the picture –a formal hinge separating the figure’s head from her body like an exquisite corpse. So too do the creases, tears and stains lend a patina that evidences the LP

cover’s former life –a detail that conceptually parallels Pyle’s use of autobiographical titles that hint at his personal history.

Though his own life makes it into the drawings in subtle ways, Pyle’s work is resolutely imaginative. For artists who work so intuitively, putting into words one’s decision making process is something next to impossible. Pyle borrows Picasso’s adage regarding the kind of “shock” or “jolt” an artist experiences with a certain combination of aesthetic elements, though, with Pyle’s labor-intensive, tremendously precise drawings, it’s hard to imagine any decisions taking place within a mere moment. Indeed, the nature of the artist’s craft is such that each of these impulses

arrives in the midst of slow, tedious handiwork. He has so much time to contemplate such intuitions, to distill the impulses of his imagination and formal expertise, as his hand continue with their motions, rote and tremendously proficient. 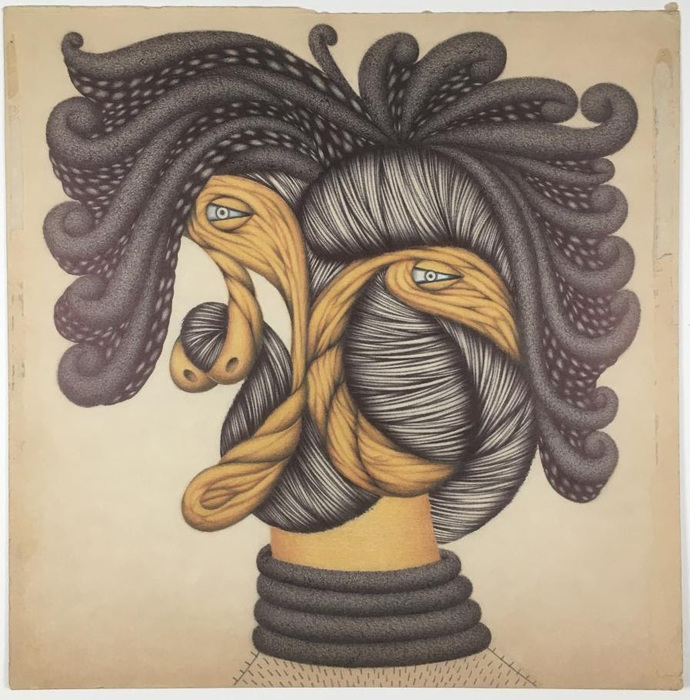