As recently as the 1970’s, one in four Native American children were living in non-Native foster care, adoptive homes, or boarding schools. Follow the first government-sanctioned truth and reconciliation commission in the US as it witnesses intimate, sacred moments of truth-telling and healing. With exclusive access to this groundbreaking process and never-before-seen footage, the film reveals the untold narrative of Indigenous child removal in the United States. DAWNLAND foregrounds the immense challenges that this commission faces as they work toward truth, reconciliation, and the survival of all Indigenous peoples. (Adam Mazo and Ben Pender-Cudlip, 2018)

Hosted by Eve Ewing in conversation with Heather Miller, executive director of the American Indian Center in Chicago.

DAWNLAND is part three of Race and American Schools, Cinema 53’s winter screening and discussion series. In this trio of documentaries, we explore the central role that race has played in the experience of schooling in America. Is education truly “the great equalizer”? Who is left out of that vision? How can education be used as a tool for liberation– or oppression? Curated by Eve L. Ewing, assistant professor at the University of Chicago School of Social Service Administration and author of Ghosts in the Schoolyard: Racism and School Closings on Chicago’s South Side, the winter series brings together a researcher, a community organizer, and a filmmaker to unpack the sordid story of race and education, and imagine the future of American schooling.

Heather Miller is an enrolled member of the Wyandotte Nation from Oklahoma. Her passion for seeing Native American organizations succeed inspires her in her role as the current Executive Director of the American Indian Center in Chicago. She began her professional career working for Hopa Mountain in Montana where she helped Native Nonprofit organizations develop their capacity. She then worked in Seattle with Potlatch Fund, a Native American Foundation where she continued to provide capacity building trainings to Native organizations as well as teach non-Native Foundations how to work appropriately with Indian Country. She has worked to develop programs, lead organizations and direct grants of various sizes. Heather currently serves as a Board Member and Program Committee Chair for the Chicago Cultural Alliance. She holds a Bachelors of Philosophy from Miami University in Ohio and a Masters of Native American Studies from Montana State University. Heather is also a graduate of the Leadership, Apprentice, Economic and Development program through First Nations Development Fund and a graduate of the Cascade Executive Program through the University of Washington. She is also a 2019 Leaders For A New Chicago Awardee.

Admission is free and open to the public. Seating is first-come, first-seated. Doors open at 6:45pm.

Cinema 53 is a screening and discussion series presenting conversation provoking films by and about women and people of color. Housed at the historic Harper Theater in downtown Hyde Park, Cinema 53 brings together scholars, artists, students and audiences from Chicago’s South Side and beyond to watch films that reflect, and reflect upon, the social and economic hierarchies that structure our society. We show works across the spectrum of narrative, documentary and experimental, classics and rarities, archival to contemporary. Curated by film scholar Jacqueline Stewart, Cinema 53 invites inclusive, intersectional, intergenerational dialogue that supports the work of artists from historically marginalized groups, and cultivates constructive critical thinking among viewers of all backgrounds. 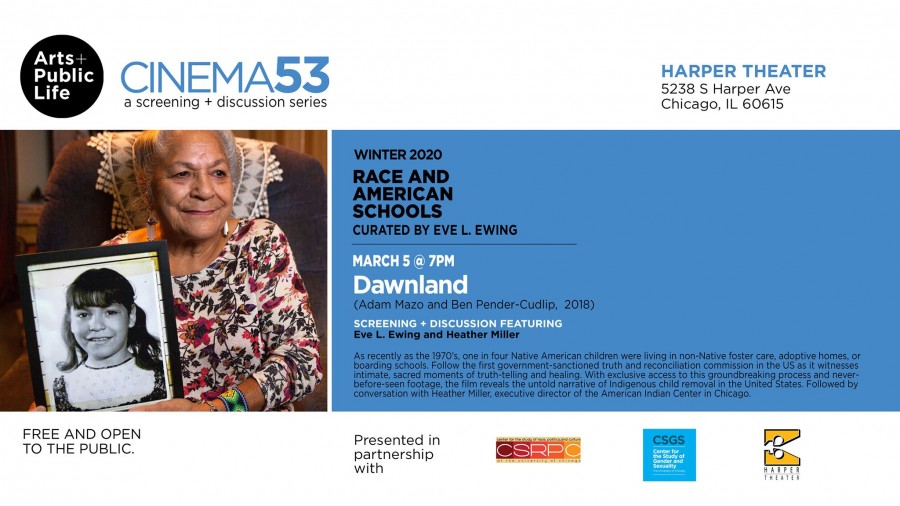