On view through Wednesday, April 8th

Cinespace Projects is elated to present Greatest Hits, a solo exhibition by Berlin-based artist Annelies Kamen. Kamen’s work in video, sculpture and print is as deft as it is daft. Playful and thoughtful while materially resolved, she teases as she teases out. Greatest Hits finds the artist performing a semiotics of the silly, physically enacting sonic translations of cartoon concretions; what we might call a sound affect.

Greatest Hits draws upon an archive of onomatopoetic sound effects from Don Martin comics published in Mad Magazine between 1957 and 1988. This work is a collaboration with Almut Schwacke, a Berlin-based Foley artist, who created each sound effect for the video. The effects were generated using only the recording of sound produced by physical objects – without the use of sound libraries or digital sound production. Greatest Hits reifies and reauthors the comic-strip sound effects and their precipitating events, centering the legitimacy of female fools in response to a source that historically and continually excludes female contributors.

Annelies Kamen lives and works in Berlin. She received her MFA from the School of the Art Institute of Chicago in 2014 and a combined BFA/BA in Art History from The School of the Museum of Fine Arts, Boston in 2011. In her work, Kamen engages with language and humor from a feminist perspective, playing in the power dynamic of joke-making. Recent solo exhibitions include FROMO at Seattle Freezer; Annelies Kamen for Western Pole; Thanks, I’ll Be Here All Week at fffriedrich; I have a dining room like a mausoleum at Free Range.

Cinespace Projects is a contemporary art gallery located in the inner southwest Chicago neighborhood of East Douglas Park. Dedicated to moving image art, Cinespace’s program holds time for works that articulate and expand the histories and futures of film, video and the electronic arts. 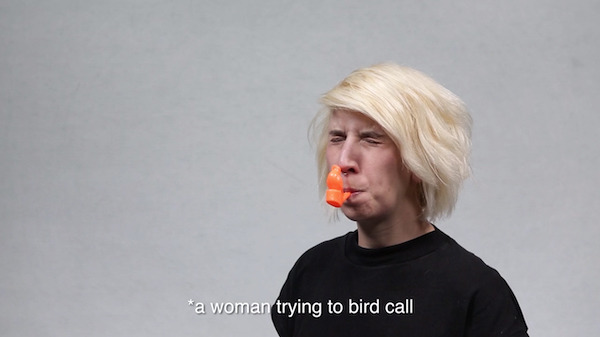